Today’s guest post comes to you via strength coach, Adam Rees, owner of GRITGym located in Iowa City, Iowa (the home state of one Capt. James T. Kirk, thank you very much).

I’ve long championed the notion that strength is the foundation for everything else.  You can’t have power, agility, endurance, a great hair day, without first having a solid base of strength of which to “pool” your resources from.

In today’s post Adam dives into that very topic and helps break down why strength is so important.

Strength and Conditioning could be fairly well simplified with:

However it gets more complicated when we take on an individual’s age, training age, demands of their sport, the time of year, and shear physical and mental capabilities.

This is the Absolute Strength vs Absolute Speed Spectrum of which all of Strength and Conditioning programs are based and how it applies to the programming for athletes.

This is more reasoning for why we should be doing less Olympic lifting or training for power in general. As well as a guide to when and where we want more or less emphasis on sprint and agility work throughout the year. Basically, we need more strength.

There is no speed without power, and no power without strength.

So emphasize strength first, then we can start thinking about the stuff that gets kids noticed, like 40-yd dash times and pitching velocities (of which neither can be trusted simply because of the human thumb, and cheap radar guns lie), not to mention the ‘fishing story’ principle.

I should also mention that getting noticed and getting recruited are two different things. A kid that throws a legit 85 MPH (emphasis on legit) in high school but gets taken yard three times a game because he’s throwing belt high and down the middle every pitch or he’s so weak and has such little lower body strength that he’s incapable of lasting more then four innings….won’t be setting off any recruiting alarms anytime soon, even though there’s untapped potential.

A fast 40-yd time is similar if a player is unable to put a hit on anyone because he crumbles every time he tries. There’s no use in a guy who looks like Tarzan but plays like Jane.

During the competitive season athletes are already getting enough running and jumping during practice and competition, there is little to no need to program extra.

After the season athlete’s bodies are in shambles. They’ve just torched themselves for a few months and it’s time to take a more rehabilitative/corrective approach to training and promote recovery.

There’s little need for plyo and sprints, but increasing med ball work as well as power movements is beneficial as they aren’t performing nearly as much now that the season is over. This portion of the year is simply to bridge the gap to their off season and prepare the body for it, which in many ways will be just as stressful on their bodies as their season, but in a much more controlled and supervised manor.

This portion will only last 3-5weeks.

Now that the body has recovered and is ready to perform we need a balance of the entire spectrum.

This is the fun part of training. 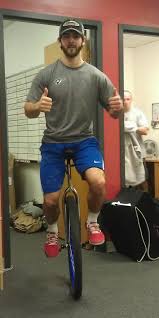 In the offseason we can tailor workouts daily with grip and vertical jump measurements (auto-regulation) as well having a more “open” schedule to work with, which is where we can make huge gains.

This is where we spend quite a bit of time at BOTH ends of the spectrum. The idea of spectrums is that if we ‘master’ both ends, we’ve mastered everything in between. During the offseason we’re spending the majority of our time at the two ends with this very thing in mind. We still bridge the distance with some power work such as using speed pulls and kettlebells, but the majority of our time is spent on both opposing ends.

During pre season we’re starting to move more towards the specificity of the sport, which outside of long endurance races, means more speed and more skill work.

This means we’re going to be spending more time towards the absolute speed end of the spectrum. Not necessarily moving away from the absolute strength, however we’re not going to be trying for a 1RM during this time.

** Baseball gets interesting due to it’s unilateral nature, so we need to program in extra arm care and med ball work as well as certain core exercises for an athlete’s opposing side, so a right  handed thrower and hitter typically may need more shot puts and hip tosses on his/her left side.

Here we’re tailoring workouts based off an athlete’s needs and specificity of their respective sport.

Youth athletes should already be getting enough speed work during their PLAY that needs to be coming from an assortment of activities such as: Wrestling, Football, Baseball, basketball (but only for the hand eye, the rest of this sport is sickeningly awful for athletic development, especially the mental side), Swim, Snow Board, Rollerblade, Dodgeball, Skateboard, TAG, Soccer, Boxing/Martial Arts, Gymnastics/parkour (although it’s not always kind to the spine), Rock Climb, Fishing, Etc.

This is why youth athletes do NOT need these speed camps that are becoming increasingly popular(or the kettlebell movement that’s taken hold, kettlebells are a power movement).

Strength first, not speed, and not power, but strength.

Note from TG:  for those interested, HERE’s my take on whether or not youth athletes need power or speed training.

Hint:  they need it about as much as much as we need another Kardashian spin-off.

Training for anything else is a waste of time, and a huge waste of money for parents. Speed will take care of itself with more strength. Besides that, from a psychological perspective, the less a kid “thinks” about his running form….the better.

More NON-competitive action and unorganized play like this is better as well. Participate in ONLY ONE season at a time, make sure to get some down time, and get outdoors to do something fun at some point too: rock climb somewhere real, go fishing, canoe/kayak, maybe even hiking.  And for the love of all that’s holy, turn off the tv! Adam Rees is Founder of GRIT GYM, a gym based on results, creating a culture and lifestyle of performance, strength, health and freedom to live life on your own terms.

Adam attended Wartburg College, worked under nationally recognized Strength Coach Matt McGettigan at ISU and is generally a glutton to information and improvement in all forms.

I’ve been a fan of “offset” loading for a number of years now. Without getting too deep in the weeds on what offset loading is and what the benefits are… …it’s when you either stagger your foot or hand position on certain exercises OR you load an exercise a certain way (how you hold a… END_OF_DOCUMENT_TOKEN_TO_BE_REPLACED

Last week I received an email from Jon Goodman. At first I thought he was going to extend an invite to me to come up to Toronto for a weekend of watching Jean Claude van Damme movies. But that wasn’t the case. Fingers crossed for next time. Nope, instead Jon was curious if I’d be… END_OF_DOCUMENT_TOKEN_TO_BE_REPLACED