For a little taste of nostalgia you can watch the video HERE.

Now, I’m not an ex-NBA legend.  I might be able to dunk a tennis ball.  Maybe.  But only if you gave me a running start (and a trampoline). Or a JetPack.

Julia Child was pretty much a boss in the kitchen.

You can’t discuss the history of film and not mention the name Steven Spielberg.

Sandy Koufax had arguably the most devastating curveball in baseball history.

Is there a bigger douche to the douchiest power nowadays than Justin Bieber?

All of this to say: Everyone has their own speciality or a skill that they’re known for.

Me?  While I’d like to sit here and say it’s hanging out with Jason Bourne, in reality it’s nothing nearly as badass.

While they’re badass in their own right, I think anyone who’s read my stuff for any length of time knows that I have a particular affinity for deadlifts, and that that’s what I’m known for.

Which is weird because I don’t own any records.  Not even close.  Heck, I’ve never even competed! Giving a little credit to myself, though, my best pull is 570 lbs (which at the time was 3x bodyweight).

On top of that, if someone triple dogged dared me, or, I don’t know, if Kate Beckinsale walked into a room and said, “Tony I’ll make out with you right now if you lift 500 lbs this very minute,” I’m fairly confident I could do it.

Standing on a BOSU ball.

More to the point (and a bit less facetious in tone):  I know how to coach the deadlift very well.  So to steal the quote from the Iceman above.

One thing I can do…..is coach the deadlift!

And it’s with that quote in mind that I wanted to take today and do a pseudo “brain dump” on a few insights and common (or not so common, depending on who you are) mistakes I notice with regards to deadlift technique.

1.  Not Choosing the Correct Deadlift Variation

I’ve said it before, and I’ll say it again: everyone should be deadlifting in some form or another.  What other exercise accomplishes so much?

I’m biased. You’d be hard pressed to convince me otherwise that the deadlift isn’t one of the best overall exercises for hypertrophy, not to mention the best functional exercise you can do with respects to posterior chain strength, core stability, glute activation (terminal hip extension), power development, and transference of force throughout the entire body.

Likewise, when done correctly, deadlifts help to prevent shear loading on the spine, help engrain a hip hinge pattern (which spares the spine), and you could make a case plays a role in “preparing” people for life.

Ask your grandmother to pick up a bag of groceries.  That’s a deadlift!

My friend, Nick Tumminello, wrote a fantastic post awhile back on assessments and brought up an interesting question:

“What’s the point of doing whatever assessment you’re doing, when you have all your clients squat, deadlift, perform X, Y, and Z anyways?”

I respect Nick a ton. It’s hard not to look up to someone with as much experience as him, and  I’ve learned a lot from him.

And while I “get” what he was trying to say, even when I originally read his post (and forgive me if Nick’s perspective has changed since he wrote it) I couldn’t help but cock my head like a curious puppy being asked to fetch.

From my point of view, YES, the goal is to have all my clients squat, deadlift, perform single leg work, crush push-ups, row, bench press, sprint, push the Prowler, arm wrestle a tank, and many other fitness and performance based methodologies.

The point of the assessment – outside of the obvious – is for the client/athlete to prove to me that they can perform said movements correctly and without causing further harm.

With regards to the deadlift, the results of their assessment – outside of providing information on any imbalances or any glaring deficits that may exist – is going to tell me which variation of the deadlift I’m going to start them on.

If someone has a cranky lower back or anterior knee pain (or both), it may be wise to start them on a trap (or hex) bar deadlift.  Because the body is placed inside the bar, there’s less shear on the spine.  Likewise, the trap bar (like most DL variations) require a more vertical tibia which will feel significantly better on the knees.

Looking a bit deeper, if someone has a deficit in ankle dorsiflexion or needs a crowbar to loosen up their hips, having them attempt to get all the way down to the bar for a conventional deadlift is going to be compromising. 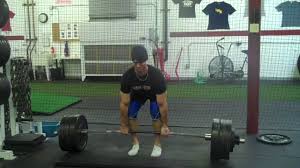 Instead it may be more advantageous to have them perform a Sumo style deadlift – maybe even elevated slightly depending on the severity of their limitation.

The point is: not all deadlift variations are created equal, and it’s important to consider what will be the right fit based off of one’s body-type, experience, limitations, and injury history.

One instantaneous red-flag I’ll notice with many people deadlifting is when I see their hips rise too quickly when initiating the pull. Like this:

Kelly Starrett mentioned this same concept in his book Becoming a Supple Leopard, but when this happens it’s generally a failure to get (and maintain) TENSION!!!  You could also make the same argument whenever you see someone initiate their pull and they turn into a “scared cat” with their back rounding like crazy.

The deadlift is a bit more than just “bending over and picking up a bar.”  I like to tell trainees that the hips and shoulders should “break” synchronously.  Meaning there should be a synergistic dance or interplay between the hips and shoulders.  If the hips break first or come up too fast in relation to the upper body, we just need to slow things down a tad and get more tension.

Lack of tension = an energy leak, and that’s the last thing you want when trying to pull heavy things off the ground.

1.  Hinge back – pushing your butt back towards the wall – as if you’re performing an RDL – until your hands reach the bar.

2.  Once there, you’ll grab the bar with one hand and pull the “slack out.”  Basically, you’re going to activate or engage your lat and posteriorly tilt the scapulae, which will provide a ton more stability/tension.

3.  You’ll then repeat the same process with the other hand.

Note:  a more simplified and less geeky way of explaining things is to pretend you have an orange in your armpit and that you’re trying to squeeze out some orange juice.

This cue will ensure all of the above:  lats will be engaged, scapulae will posteriorly tilt, and the chest will be up.

4.  In order to maintain tension in the hamstrings (kind of important for deadlifting big weight) the hips should stay somewhat high (this will vary for numerous people, but they should never be above the shoulders), and you should think about “pressing” or “pushing” yourself way from the floor – generating force INTO THE FLOOR. Like this:

Notice how, compared to the first video, the hips and shoulders have more of a timed interplay?

This is what’s “ideal” and will result in better deadlifting performance for most people.

I’ve been a fan of “offset” loading for a number of years now. Without getting too deep in the weeds on what offset loading is and what the benefits are… …it’s when you either stagger your foot or hand position on certain exercises OR you load an exercise a certain way (how you hold a… END_OF_DOCUMENT_TOKEN_TO_BE_REPLACED

Last week I received an email from Jon Goodman. At first I thought he was going to extend an invite to me to come up to Toronto for a weekend of watching Jean Claude van Damme movies. But that wasn’t the case. Fingers crossed for next time. Nope, instead Jon was curious if I’d be… END_OF_DOCUMENT_TOKEN_TO_BE_REPLACED