Today’s guest post comes from Justin Kompf, who’s had several articles featured on this site like THIS one and THIS one.

Not only is he a professor at my Alma Mater, SUNY Cortland, but he’s also someone I feel is going to do a lot of cool things in this industry.  He “gets it,” and I hope you take the time to read what he has to say.

I’m actually heading to Warrior Fitness this morning to do a workshop for a group of trainers and fitness enthusiasts here in Cancun, and I don’t speak a lick of Spanish….haha.  This should be interesting.

Note: please excuse the formatting issues as of late.  I had WordPress updated on my site a few days ago and it seems to have caused a few glitches.  Hopefully the issue will be resolved soon. If not, the internet is sooooo going to be sent to bed with no dinner tonight!!!

Early on in my lifting career I quickly excelled at the deadlift. Speaking strictly from an anthropometric point of view, having a shorter torso and longer arms, I’m built for that lift.

However, once I started competing in powerlifting (and wanting to place) I quickly realized my squat needed to catch up to the deadlift. Over the course of the last year I took my squat from 350 pounds to 420 pounds while staying in the 181 pound weight class.

To achieve this I did two simple things that can be easily applied. I switched to a box squat and I planned periods of overreaching in my training prior to competition.

Note from TG:  losing in a Predator hand-shake off didn’t hurt either.

My biggest problem with the squat was coming out of the hole, (bottom of the squat) I would consistently lean forward when the weight was too heavy. I tried using Olympic shoes which initially helped.

There’s evidence to suggest that wearing shoes with a raised heel can help the lifter stay more upright during the squat with sub max loads which I found to be the case.

Restricting dorsiflexion to keep a vertical shin usually increases forward trunk lean. For example, one study by Fry et. al. did just this, they placed a barrier to restrict dorsiflexion during the squat and found that the subjects who had restricted dorsiflexion leaned forward more (Fry).

Olympic shoes allow you to stay more upright because you are granted more dorsiflexion. However, whenever I would get close to maximal weights I would still lean forward with or without the Olympic shoes on.

In competition there are a large variety of squat variations with different stance widths. For example, lifters performing a traditional squat might only have their feet half as wide as those performing a powerlifting style squat! (Swinton).

Typically the lifters with a narrower base end up letting their knees come forward more than those with a wide stance squat. Now, logic would dictate that those lifters with more anterior knee displacement would stay more upright than the powerlifters with the wide stance and near vertical shins, but this just isn’t the case.

Swinton et. al. compared three different squat styles, traditional, powerlifting, and box in twelve male powerlifters. They found that the torso angle of powerlifters is not dependent on the amount of anterior knee displacement. This means that compared to recreational lifters who lean forward more if dorsiflexion is restricted, powerlifters find a way to stay more upright while maximizing posterior displacement of the hips.

That’s where the box squat came in for me. It was a great teaching tool to help me stay more upright. A common misconception  (that I thought for the longest time as well) is that the box squat is building up the posterior chain more. Turns out it might not even be better than the traditional or powerlifting squat for training hip extensors. What the box squat is good for is force development, which you can read more about HERE.

Anyhow, with the box squat I was able to practice keeping a vertical torso with vertical shins as well. For anyone that struggles with staying upright on the squat, I highly recommend the box squat. If you’re competing be sure to do some squats without the box prior to competition though to get used to not having the box underneath you.

Over reaching is simply a planned period of overtraining without any of the detrimental effects of overtraining or the long periods of rest needed to recover from overtraining. I experimented with two different overreaching squat specialization programs for the two meets I competed in over the last year. The first was called smolov jr., a baby form of what I can only imagine to be a terrifying 13 week squat cycle.

Here’s the layout for the smolov jr squat cycle:

On week two you add 10-20 more pounds onto the weight you were doing from the given percentages.

On week three you add 15-25 more pounds onto the weight you were doing in week one from the given percentages.

After performing this overreaching cycle I recommend taking a week off so that the strength you gained can come to fruition. If you’re competing I would recommend finishing this cycle 2-3 weeks prior to the competition. If you have three weeks, deload for a week then do a “practice meet” working up to your opener for the squat, deadlift, and bench press and then take it easy for the week prior. If you have two weeks, take your deload week then work up to the openers, saving at least three days of rest before the meet.

This squat overreaching program took my squat from 350 pounds to 380 pounds.

The next overreaching cycle that I did prior to my meet was a 6 week Russian squat cycle.

This was double the length but I wasn’t squatting four times per week which was nice. With this program you are actually setting a new squat max on the last day which you could take as is, or plan to use that or a weight close to that for an opener. Odds are you’ll be able to squat more than that after your body gets a little rest and recovery. I finally joined the 400 pound squat club (if there is one? I haven’t been formally inducted I assume there’s some sort of ceremony). In the meet I ended up getting a 420 pound squat. 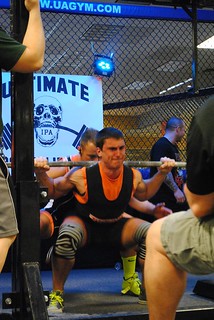 Training over the last year was far from easy but every time I finish a meet I’m dying to get back to it. I love seeing my strength increasing, knowing that I’m better than I was a year ago. Other than a determined mindset all it really takes is attention to detail and form and a systematic plan to get better at whatever your weakness is! 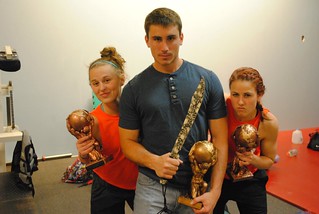 Justin Kompf is the head strength and conditioning coach at SUNY Cortland. He has a powerlifting team comprised of 13 super strong SUNY Cortland students who regularly crush state records in New York within the IPA powerlifting federation. His best lifts are a 540 pound deadlift and a 420 pound squat at the 181 weight class. His website is JustinKompf.com and he can be contacted at justin.kompf90@gmail.com.

Being human means being enamored by a litany of things in the health/wellness/physical preparation realm. Some people are easily swooned by fancy watches and elaborate looking exercises Others by cryochambers and Paleo recipes that taste like sawdust. I am not here to play judgement police. For the most part, everything has a time and place… END_OF_DOCUMENT_TOKEN_TO_BE_REPLACED

Back tweaks are an inevitability. They happen to people who lifts weights regularly, and those who just look at weights. They happen when doing something as inane as bending over to tie your shoes, as well as when you’re doing some less inane, like, fighting crime at night. They happen on a Wednesday. There’s no… END_OF_DOCUMENT_TOKEN_TO_BE_REPLACED