Why the Box Squat is Overrated

There are a lot of things I don’t do anymore that I used to. 1. Unlike when I first moved here eight years ago, I no longer refer to Boston as Beantown. That’s a big no-no amongst locals.  Doing so is as sacrilegious as wearing a Laker hat or a Derek Jeter jersey down Boylston!

2. I don’t watch Saturday morning cartoons. That much.

3. I don’t start hyperventilating into a brown paper bag anymore if a baseball player walks in on day one and lacks internal range of motion in his dominant throwing shoulder. As Mike Reinold brilliantly states HERE, glenohumeral internal rotation deficit (GIRD for short. Who wants to write all that out?) is a normal adaptation to the throwing shoulder.

4. I no longer feel Star Wars Episode I: The Phantom Menace is the weakest chapter in the Star Wars saga.  That title goes to Episode II: Attack of the Clones.

Wanna know what else I don’t do?

I Don’t Place Box Squats Into Any of My Programs

Well, I do place box squats in my progams and I don’t.  Let me explain myself a bit further.

So that I can stave off the barrage of hate mail and people reaching for their pitchforks at the notion of me saying something so batshit crazy….

While the box squat is considered a fairly advanced movement (and it is), it might come as a surprise to know that we use them quite often with beginners at CSP – particularly with regards to teaching proper squatting technique.

Lets be real, most people don’t come remotely close to squatting to acceptable depth (for the record, this equates to the point where the anterior surface of the thigh is BELOW the knee joint), let alone performing anything that you’d actually, you know, call a squat.

Most guys kinda bend their knees a little bit and call it squatting, like this guy.

Nevertheless, the box squat is a superb way to keep people honest with depth and “groove” the proper pattern we’re looking for: to break their descent with their hips, push their knees out, and learn to sit back a tad more. Doing so targets the posterior chain to a higher degree and increases the lever/moment arm of the hips to take on a larger brunt of the load (rather than the knees).

I understand there’s a bit more to it than that and that this is a pretty extensive topic which people write books about. Cut me some slack, I’m trying to simplify things here.

Besides, considering most people have ADD as it is and won’t read past the first two paragraphs anyways, I figured something short and to the point would, oh look, a shiny!

Where was I again?

In short, box squats serve a purpose and I do utilize them quite often with beginners and some intermediate lifters to help groove technique and coach appropriate depth.

Outside of the learning curve, and once someone exits the beginner stage, for RAW lifters I don’t feel box squats serve a purpose or have a place in a training program.

Note:  for those wondering what the hell I mean when I say “raw lifter,” all I’m referring to is someone who is not a competitive powerlifter and doesn’t use gear to lift.  I.e., a squat suit.

When someone wears a squat suit it changes the dynamic of the lift. You HAVE to sit back more aggressively compared to not wearing one. 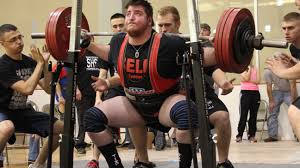 Powerlifters utilize the box squat because it’s specific to their sport. They have to sit back because if they don’t they’ll be a crumpled up ball of fail on the platform.

Past a point, for raw lifters, the box squat creates too many bad habits.

1.  Teaches people to sit back more than they could/should.

2.  Teaches people to “relax” on the box and to rock their weight back up. This works for geared powerlifters because A) they’re strong enough to stay out of those last 2-3 degrees of end range flexion of the spine and B) the suit is there to help provide more stability.

Stealing an awesome quote from the guys over at Juggernaut:

“Do not focus on excessively sitting back onto your heels if you are a raw lifter, this is not advantageous because you don’t have a suit to sit back into. There will be some forward movement on the knees in the lift and that is fine. A short movement of the hips backwards and then squat down from there. “Back, back, back” isn’t for you, it is more “down, down, down”.

– 10 Steps to a Great Squatting Technique

And there you have it. That’s my current line of thinking regarding box squats. If you’d still like to grab pitchfork, go for it.  But hopefully I did a good enough job making my case.

EDIT:  to say that I also find box squats are a great fit for those who are unable to squat (deep) due to knee issues, Femoral acetabular impingement, other musculoskeletal issues, or simply their own anatomy.

Here are a couple of articles I wrote on the topic:

How Deep Should I Squat?

Does Everyone Need to Squat Deep?

Back tweaks are an inevitability. They happen to people who lifts weights regularly, and those who just look at weights. They happen when doing something as inane as bending over to tie your shoes, as well as when you’re doing some less inane, like, fighting crime at night. They happen on a Wednesday. There’s no… END_OF_DOCUMENT_TOKEN_TO_BE_REPLACED

Hello, hello! I know. It’s not lost on me that I’ve been an abject failure on the “writing new content” side of things. If it’s any consolation I’ve also been lackluster on a few fronts: Calling my mom. Avoiding pizza. Not (not) being jacked. Hugs. My free time has been monopolized by what can only… END_OF_DOCUMENT_TOKEN_TO_BE_REPLACED