Welcome to the first Miscellaneous Miscellany Post of 2015! Fresh off an impressive Pats win last night no less!

So, what’s everyone’s prediction for the Super Bowl? I honestly have a hard time convincing myself to pick one team over the other. I tend to ride on the same fence as my favorite sports talk guy, Colin Cowherd, in that both teams have a star quarterback (Pats = Tom Brady, Seahawks = Russell Wilson), both have a solid offensive line (particularly left tackle), and both have an A+ head coach (Bellichick and Carroll, respectively).

1. So yesterday Lisa and I were walking around town doing a little of this and a little bit of that1 when something unexpected happened.

Most of you will recall my trip to London last September, when I travelled across the pond for one of mine and Dean Somerset’s workshops. While the main reason for going was to spend two days at The Third Space in Soho speaking to 25-30 trainers and coaches, I also had ample time to play tourist and had the opportunity to walk around the city and take in the sights and sounds.

It was spectacular. I fell in love with London – everything from the people, the Underground2, the food, the culture, and just how chill everyone is over there was enchanting.

One of the subtler highlights of my trip over there was experiencing Caffe Nero.

A popular, family owned, European (Italian) coffee shop, Caffe Nero has something like 600+ locations throughout Europe; and they’re everywhere in London.

There was one directly across the street from the venue where Dean and I were presenting (as well as near where our hotel was located in Euston Square), and after having one of their chai tea lattes I was hooked.

The quality just seemed better compared to similar establishments3, and this doesn’t speak to the overall vibe and ambiance inside…..hard to describe, but “boner inducing” is about the best I can do.

Anyways, Lisa and I were walking around Downtown Crossing in Boston yesterday when low and behold we passed a freakin Caffe Nero!!!

Picture inside of Downtown Crossing location.

Little did I know that this location was the FIRST location in the entire US!! And the manager/owner mentioned to us that a handful more are slated to open around the city in 2015.

I had been bragging to Lisa about this place since my London trip, so I was excited to see what she thought.

She ordered her standard espresso and LOVED it. “This is coffee!” were her exact words.

I have to assume with several locations coming to Boston, that Caffe Nero has plans to open in other large cities in the near future. So keep your eyes peeled. You won’t be disappointed.

For the past year or so I’ve been running a group called the Tony Gentilcore Premium Workout Group.

It’s an online training program hosted by WeightTraining.com where I write monthly “canned” (non-individualized) programming for anyone to follow for a bargain price. Yes, I’m a guy who feels that IN-PERSON coaching is the way to go. But given not everyone has access to quality coaching in the first place, this group is a nice alternative. In 2014 I focused on providing a variety of training blocks: strength block, fat-loss block, and a hybrid hypertrophy block (which are all still available if you choose to do them), but with 2015 kicking into high-gear I decided to revamp my approach.

Not everyone wants to focus on strength or fat-loss or muscle growth, and I certainly can’t cater to everyone and make everyone happy.

Still I know how to write effective, efficient, quality programming that will help (most) people get stronger, move better, address nagging injuries, and make people of the opposite sex (or same sex!) want to hang out with you. Rather than write specific blocks of training, in 2015 I’m just keeping things simple.

Don’t confuse simple with not effective

Simple is what most people need BTW.

If you find yourself in a training rut or in limbo as far as succumbing to analysis by paralysis when writing your own programs, this group may be a perfect fit.

Give it a look HERE.

3. For those people who are looking for something more dialed in, specifically to the tune of improving your squat, bench press, and deadlift, my good friend Jordan Syatt released his Raw Strength for Powerlifting manual today. 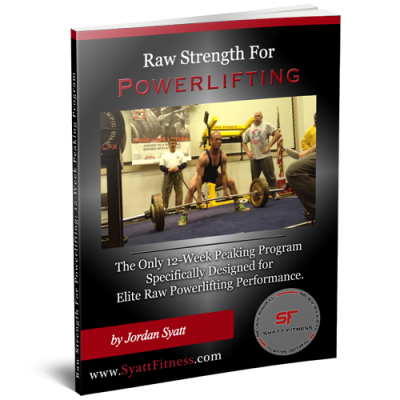 If you’re a competitive powerlifter or someone who’s toying with the idea of entering a meet down the road, this manual will undoubtedly help.

Jordan, on top of being one of the most genuine fitness professionals I have ever met, is one strong mofo….to the tune of a (close to) 4x bodyweight deadlift! So, in a word, he knows what he’s talking about when it comes to getting people strong.

Full Disclosure: I am not receiving any affiliate kick-backs by recommending this manual. I just think it’s a solid resource that can (and will) help a lot of people.

4. In addition to the Caffe Nero experience, Lisa and I also went to the movies yesterday to check out American Sniper.

In lieu of “douchehole of the moment” Michael Moore’s commentary on the movie yesterday, where he basically referred to Chris Kyle as a “coward” (I don’t mind that he didn’t like the movie – to each his own – I just felt it was a bad take done in poor taste on Moore’s part to use the term coward), I couldn’t have disagreed more.

I’m not calling a Kyle a saint by any stretch (I know he had a few libel suits in the past held against him, and I also know some elements of his book have been called to question), but I find it hard to call any person who risks his 0r her’s own life to defend our country a coward. Furthermore, I’d have to assume it’s the last adjective the hundreds (if not thousands) of soldiers Kyle helped protect and save would use to describe his actions (regardless of how Hollywoodized the movie made them seem).

I loved this movie. I wouldn’t rank it right on par with The Hurt Locker or Zero Dark Thirty as far as best (recent) war movies made, but it’s not too far off.

American Sniper isn’t just a war movie. If anything it’s more about the psychological and after effects that war has on soldiers. To his credit – and my fiance would know more about this than myself since she’s a psychologist – Bradley Cooper (who portrays Kyle in the movie) did an amazing job showing how one almost has to “shut down” and remain closed off in order to perform their job – to the detriment of their relationships with loved ones.

Pacing, acting, cinematography, dialogue, directing, everything was superb.  I give it a solid B.

5. I made it a personal goal of mine to step up my continuing education game in 2015. I was able to attend a few workshops and seminars last year, but not as many as I would have liked.

I’ve already got a sick line-up slated for the early part of this year:

To start, Greg Robins is putting on his Optimizing the “Big 3” Seminar again this March at Cressey Sports Performance.

I attended last year (and helped out with coaching), and I plan on attending again this year. Greg is a FANTASTIC coach who has a lot of knowledge with regards to coaching and getting results. If you’re looking to spend an afternoon going into more depth on squats, bench pressing, and deadlifts….this will be well worth it.

Second (and obviously not in chronological order) I’ll be heading to Burlington, MA the weekend of February 20th for both the FMS I and II certifications.

Brett Jones will be coaching/teaching that weekend and I can’t wait to watch him in action!

You can go HERE to check out other FMS venues/clinics.

And last, also in February, Chad Wesley Smith of Juggernaut Training, will be in Boston on Sunday the 8th to head his Powerlifting Clinic.

It’s a one-day seminar where he’ll discuss anything and everything related to technique on the big 3, programming, warm-ups, and even some insight on nutrition. Plus, he’s stronger than everyone else there so he’ll make all of us feel bad about ourselves….;o)

Like I said, I’ll be attending all three. Who’s coming with me!?!?!

And Not to Be Understated or Forgotten

We shouldn’t forget the great Martin Luther King Jr and everything he stood for. Probably even more so given the current commentary and state of affairs throughout the country.

Lets hope his leadership and message from back in the day permeates to today (and then some).

Fair warning: This will not be an all-encompassing post on how to train the shoulders or how to program around nagging shoulder injuries. Frankly, I don’t think anyone wants to read a Dostoyevsky length diatribe on shoulder impingement or how improving scapular upward rotation leaves me sexually aroused. Yep, I’m weird. Instead I want to give… END_OF_DOCUMENT_TOKEN_TO_BE_REPLACED