Cleaning Up the Turkish Get-Up: Stuff People Gloss Over Because They’re Too Cool

“What does this THING even do anyways?!”

That’s pretty much the standard reaction/question I receive every time I have a client or athlete perform a Turkish get-up.

What’s the big deal anyways, right? You take a cannonball looking thingamajig, hold it in your hand, and stand up with it.

There was a time, not long ago (<– I’m trying really hard to refrain from a Star Wars reference here), where I mirrored some of the same sentiments.

I attended a Perform Better conference where one of the presenters took the attendees through some basic kettlebell exercises – namely the swing and get-up – and I thought to myself, “This is so lame. It’s a fad. Can we please go do something cool like deadlift or play Laser Tag or something?”

Then I started seeing the same exercises pop up on various fitness websites – Men’s Health, Women’s Health, even T-Nation. No! Not T-Nation. Dammit!

Additionally I started listening to guys like Gray Cook, Pavel (no surprise there, since he’s essentially the guy recognized as popularizing kettlebell training in the States), Dan John, and many other reputable coaches start to speak to the benefits of kettlebell training, in particular the get-up.

To be honest, Eric (Cressey) and myself held off for as long as we could before we accepted that kettlebells were here to stay. Guess it wasn’t a fad after-all. And it wasn’t until a few years ago when we started making a concerted effort to implement them into our programming for our clients and athletes.

Lets bring this back to the original question: “what does this thing (meaning get-ups) even do anyways?”

What DOESN’T It Do?

I’ve heard Gray Cook refer to the get-up as loaded yoga. He didn’t stand there or drop the mic or anything, but he should have. That’s an excellent explanation.

Think about it: what other exercise combines the interplay between mobility/stability while simultaneously having people incorporate the lying down, rolling, half-kneeling, and standing positions…..and then reversing those actions?

And this doesn’t speak to its versatility. I’ve used get-ups as part of an extended warm-up, as a corrective exercise, as a strength exercise, as part of a circuit or finisher (shown in the video above), and if I had a kid, I’d use the get-up as punishment for not eating all their vegetables.

In addition, it’s not uncommon to see a correlation between improved get-up performance and improved performance on the sexier lifts like squats and deadlifts.

And it’s here where I wanted to take a few moments to hammer a few bullet points on the get-up. Not so much a “how to” post – there are plenty of those on the internet, and I’d encourage you to seek out all the people mentioned above along with Brett Jones, Steve Cotter, Dr. Mark Cheng, Neghar Fonooni, and Artemis Scantalides – but rather just something to speak to the finer points of the movement that many people tend to gloss over.

I like Dr. Mark Cheng’s approach to the get-up. 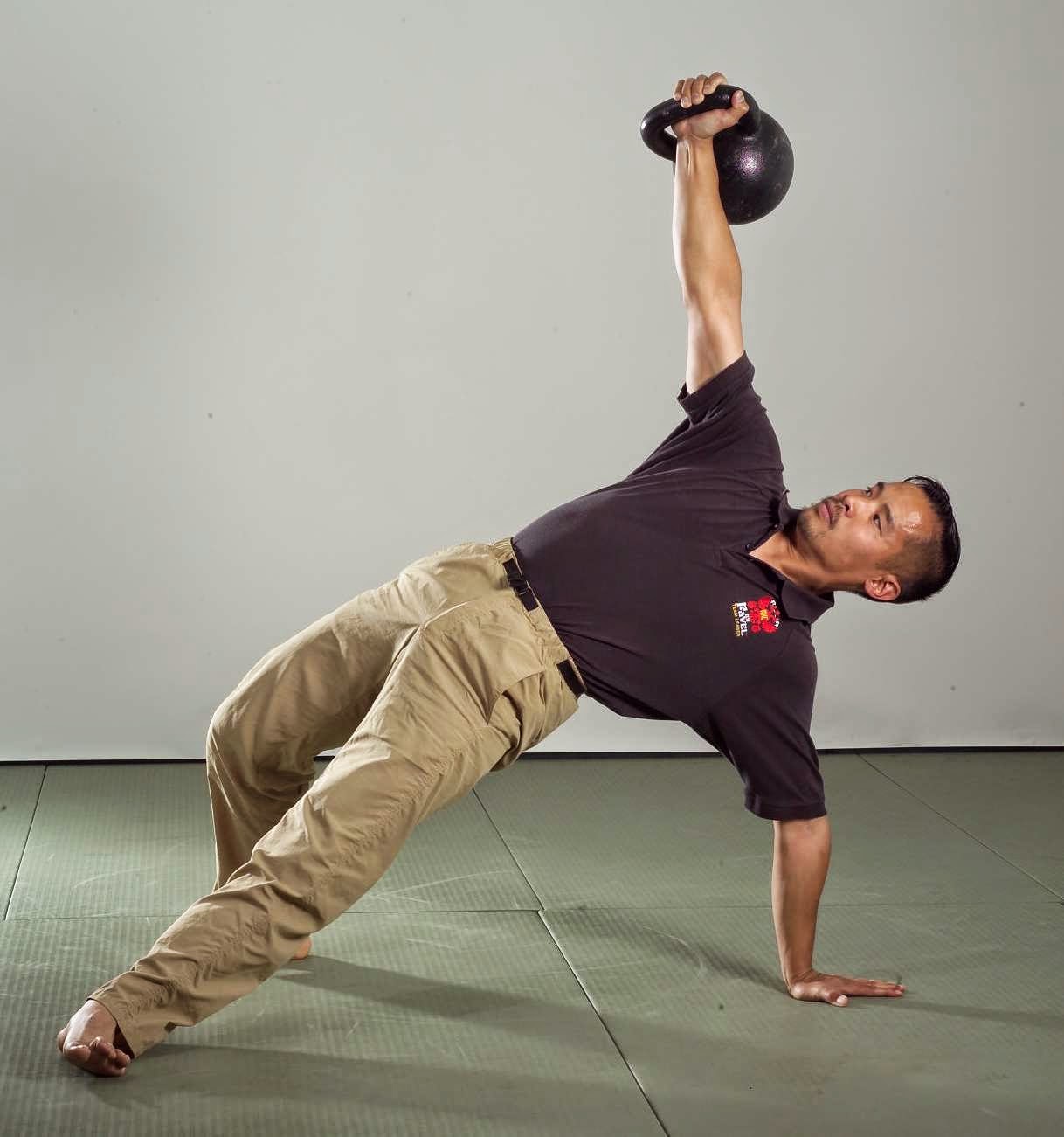 There’s a time and place to push the envelop with the get-up, but realistically, it should rarely be a max effort endeavor. I.e., it shouldn’t look as if you’re passing a kidney stone during every transition on every rep.

Dr. Cheng is a guy who could easily use the Beast on his get-ups, but he rarely does. He likes to stick with a weight between 20-24 kg and focus on the QUALITY of the movement rather than making it hard for the sake of making it hard.

I get that sometimes we want to impress our friends or Twitter followers with feat of strength, and I’ve seen many gleaming examples of impressive get-ups. However, I’d encourage most people to err on the side of conservative and use a light(er) KB than they think 95% of the time. It’s only then you’ll learn and (soon) master the movement.

Which serves as a nice segue into my next point.

Pigging back off of Dr. Cheng’s sentiments above, the get-up is like a pot roast. Much like we allow the meat, broth, and vegetables to marinate over time; we also need to marinate the get-up.

The objective is NOT to rush1. It’s imperative to OWN every transition and stage of the movement. A common mistake many trainees make is they try to speed up the get-up. Sometimes it’s due to boredom (more on this in a bit) and they just want to get the set over with for….the….love….GOD!!!

Almost always it’s because many lack the stability to do the get-up right. This can be a bodily issue or weakness or, most commonly, they’re flat out going too heavy.

A proper get-up should take a good 45-60s/PER SIDE to complete. This is where those who have exercise ADD may get bored. Sorry, it’s just the way it is.

This is why I tend to program 1-2 reps per side on any given set. Anything more than that and people start to lose focus and/or start getting sloppy with technique.

Slow down. Own every position.

The Turkish get-up is all about stacked joints and locked out joints.

I see it all the time: someone performs their get-up and their supporting shoulder is “shrugging” their bodyweight, the knee on their extended leg isn’t fully locked out, or they’re not getting full hip extension on their high-bridge (more on this below).

All are wrong, and all promote energy leaks which is only going to make the exercise harder to perform,

Another common snafu for a lot people is wrist position. Many will allow their wrist to extend back too far, like this: 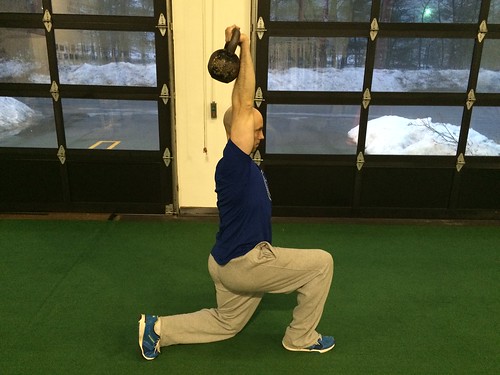 2. That’s a massive energy leak that’s going to make it much harder to control the bell throughout the rest of the repetition.

Instead I like to tell people to point their knuckles to the ceiling at all times. Like this: 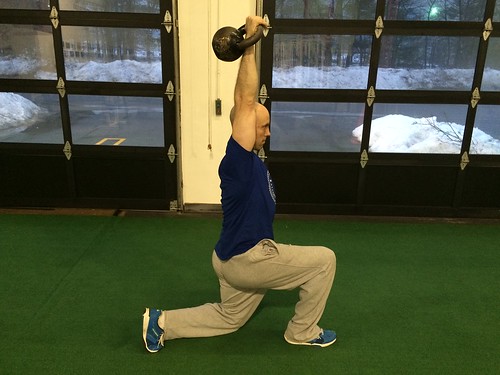 Not that I need to say it, but just to cover my bases: this rule applies THROUGHOUT THE ENTIRE MOVEMENT.

4. High Bridge vs. Sweep the Leg

You might have noticed I mentioned the high-bridge above. This is something I believe Dr. Mark Cheng introduced a few years ago, and something that himself and Gray Cook looked to as a way to “clear” someone of hip extension/hip flexor mobility.

We don’t have to be Nazis about it. It’s not right or wrong to include the high-bridge or not as a transition point. It comes down to personal preference. Really, it’s okay.

Although, anytime I can reference The Karate Kid – “sweep the leg!” – I’m all for it.

I will, however, caution fitness professionals to be leery of including this step with anyone who doesn’t have the prerequisite hip mobility to perform it.

5. Transitioning From Half-Kneeling to Standing

Last but not least, in the past I had always coached the “windshield wiper” as the best way to transition from the half-kneeling position to standing.

A few weeks ago, though, Artemis Scantalides and Eric Gahan of Iron Body Studios (located in Needham, MA), came to Cressey Sports Performance and showed us some cool hacks for the get-up. One of which I really liked and thought was brilliant.

And there you have it. Just a few things to consider to help clean up your get-up technique.

Fair warning: This will not be an all-encompassing post on how to train the shoulders or how to program around nagging shoulder injuries. Frankly, I don’t think anyone wants to read a Dostoyevsky length diatribe on shoulder impingement or how improving scapular upward rotation leaves me sexually aroused. Yep, I’m weird. Instead I want to give… END_OF_DOCUMENT_TOKEN_TO_BE_REPLACED