NOTE: As some of you may or may not know, I’m getting married this weekend. As such, I’m going to be a little hit and miss as far as how often I update the blog for the next week or so. I’m going to be too busy eating my fair share of carrot cake and *ahem* partaking in extracurricular activities…;O)

Today is a RE-POST of an article I published last year on the site. It’s without question one of the more popular posts ever published on TG.com. For anyone who missed it the first time around (or is new to the site), enjoy!

Today’s guest post comes courtesy of Seattle based blogger and writer, Sophia Herbst. I first crossed paths with Sophia- via the interwebz – a few months ago when I read her outstanding article on the Huffington Post 1200 Calories.

I included it as part of my Stuff to Read While You’re Pretending to Work series and low and behold, Sophia reached out to thank me for sharing and to say that the feelings were mutual:  she was a big fan of my work as well.

We pretty much became internet BFFs at that point.

Fast forward to a few weeks ago and she reached out again to see if I’d be interested in contributing to an article she was writing on CrossFit.  We exchanged several emails – along with some inappropriate (to share) commentary – and I asked if she’d be down with writing a piece for my site.  She was more than happy to oblige.

She’s an amazing writer. I don’t use that compliment lightly. And while I’m not a woman, as a man, it was almost impossible for me not to nod my head in agreement with everything she had to say below.

Also, just a heads up: there is some not-so-PG-13 language involved.  Deal with it.

An Open Letter to Everyone Who Has Told Women “Don’t Get Too Muscular.”

I have been strength training for about two years now. Before that, I was a starvation-dieter.

I began dieting around the age of 13 or 14. My freshman year of high school I discovered I no longer fit into size zero jeans and bam! Diet time. By the time I hit 21, the years of self-imposed malnutrition had left me at 100lbs, able to easily wrap my thumb & middle finger around my upper arm (“bicep” doesn’t seem like the appropriate word) and unable to open jars, heavy doors, or windows by myself.

Why am I telling you this?

During my seven years of starvation-dieting, I was never once told, “don’t get too thin”.

In contrast, during my two years of strength training I have been told, “don’t get too muscular” countless times.

The first time it happened to me, I had excitedly been telling someone about my new squat PR. Weighing in at a (finally) healthy 125, I had just squatted 100lbs. I was in the middle of explaining  “my goal is a bodyweight back squat-” when I was interrupted with a “well, don’t get too muscular now”.

Being new to strength training, this crushed me.

For an awful few days it took my focus away from becoming stronger, and back to measuring myself by the gauge of “is my body pleasing for others to look at?”

After I got over it, my dismay turned into anger – no – absolute fury at this society in which 42% of girls 5-8 years old want to be thinner, and 10 million women are battling eating disorders (source), yet we hear the words “don’t get too muscular” far more often than “don’t get too thin.”

Now, while this unsolicited “advice” is generally never welcome nor appreciated, it brings up two issues: The encouragement of female weakness, and the lack of respect for female body autonomy.

Let me tell you right now, women who strength train know how hard it is to build muscle.

If you tell a woman who strength trains “don’t get too muscular” then congratulations! You have just ousted yourself as a totally ignorant fool who doesn’t even lift.

The problem is that women who don’t strength train don’t know how hard it is to build muscle, and so this phrase, “don’t get too muscular” will seriously deter them from ever picking up heavy things in the first place.

This is a big problem. Naomi Wolf explains it better than I ever could:

When women strength train, it is an act of borderline social disobedience. “Don’t get too muscular” is the phrase of choice used by people who are threatened by strong women to put them “back in their place”.

We have three generations & counting of women who have been brainwashed into voluntarily physically debilitating themselves.

Now, I am not advocating that people start going around, accosting teenage girls with desperate pleas of “don’t get too thin! Put some meat on dem bones!” But to be completely honest, I probably would have benefited very much if I had received the message “don’t get too thin” at some point in my adolescence.

So. If you are going to say anything to a woman about her body (which you shouldn’t be doing in the first place, as I am about to explain), “don’t get too thin” is 1000% preferable  over the completely moronic “don’t get too muscular”.

Why do people think it’s appropriate to tell women what they can & can’t do with their bodies in the first place? What makes someone think it’s perfectly acceptable to tell a woman “don’t get too muscular”?

This is an issue that’s been going on since the dawn of time, with female body autonomy being disrespected from reproductive rights, to personal space in public places, to -yes – appearance, weight, & fitness.

Most tellingly, no woman – no matter what kind of body she has – is immune from invasive suggestions on how she should be caring for her body. Women who strength train are warned against getting too “bulky”, “muscular”, or (my absolute favorite) “manly”.

Women who are on the larger side by far endure the most unwanted commentary. From people remarking on what’s in their shopping carts, to what they should order at a restaurant, to what type of exercise they should be doing, to what they should be wearing whilst exercising… it never stops. Even thin women can’t escape the self-appointed body police, who unhelpfully pester them to eat more because “men like women with curves”.

Men, for the most part, do not have to entertain this type of “well-intentioned” advice, because people actually respect male body autonomy. This is something that women would like to enjoy as well.

The people who tell women what they should do with their bodies are, frankly, so arrogant they believe their “benevolent suggestions” are actually doing the woman a favor.

Y’know, helping us be more attractive to potential mates.

This completely disregards the fact that women do not exist to be aesthetically pleasing for others, and we (this may surprise some) often do things for ourselves.

Which brings me full circle to my anecdote in the beginning, about the first time someone interrupted my squat-excitement to not-so-helpfully remind me to avoid bulky she-man status.

Women who strength train are doing it for themselves, not for you. Women who lift weights have already eschewed social norms by touching iron in the first place, and I guarantee they give negative fucks about your opinions on their bodies.

So next time you are tempted to “help” a woman by telling her not to deadlift things because you don’t like muscular women, remember that nobody cares about your stupid boner. Especially not the lady deadlifting 200lbs in the gym tank that says “GET SWOLE”.

But even more importantly than not telling this to women who already have the ability to overhead press your girlfriend, don’t say it to women who aren’t strength training yet (like your girlfriend).  Because chances are, with every “don’t get too muscular” a girl hears, weight gets added to the already-heavily weighted scales that tip women away from becoming strong, healthy, and powerful, and towards a life of cardio, carrot sticks, and misery.

And no woman deserves that.

*** Be sure to check out Sophia’s bio below and to find out how to read more of her stuff!!!

At this point, if you’re a woman reading this who has little experience with strength training (or if you’re a friend, family member, or significant other of someone who’s expressed interest) you may be wondering to yourself, “well, where do I start? I don’t know my ass from my acetabulum, let alone how to perform a squat or deadlift correctly!  And, how often should I workout?  How much weight should I lift? Is it okay to train two days in a row?  OMG DID I LEAVE THE STOVE ON THIS MORNING!!?!?!?!?!”

Lucky for you I have a lot of smart, genuine, and highly respected friends in the fitness industry (male and female) who have gone out of their way to provide some fantastic resources for women.

This is an excellent choice for those with limited equipment and who prefer workouts that utilize bodyweight and kettlebells.

Another resource which places more emphasis on minimal equipment and no traditional “cardio.” It will still make you hate life, though…..;o)

This is one of the most comprehensive “female-targeted” products out there. Not only do you get a “how to” guide to strength training, but a full-blown nutritional manual written by Dr. Cassandra Forsythe.  No 1200 kcal diets here! This is a video series that guides you step-by-step on how to build your own fitness program catered to your goals and needs.

For those who just want solid information

No book does a better job at debunking a lot of common myths with regards to women’s fitness than this book.

A bit more “sciency,” but still a fantastic resource for any woman looking to get stronger and building her ideal body. 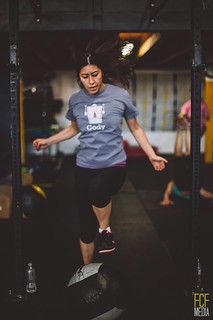 Sophia Herbst is a Seattle-based freelance writer, blogger, and proud feminist. When she’s not writing for Cody, a health & fitness startup, she’s changing the conversation about social & cultural issues through her blog.

Fair warning: This will not be an all-encompassing post on how to train the shoulders or how to program around nagging shoulder injuries. Frankly, I don’t think anyone wants to read a Dostoyevsky length diatribe on shoulder impingement or how improving scapular upward rotation leaves me sexually aroused. Yep, I’m weird. Instead I want to give… END_OF_DOCUMENT_TOKEN_TO_BE_REPLACED