Why I Turned Down a Division I Scholarship

For those of you reading who’re familiar with the movie Napoleon Dynamite1, today’s post will have a subtle Uncle Rico flavor to it.

To help refresh people’s memory Uncle Rico was Napoleon’s estranged uncle who, outside of living in the most baller van ever, was obsessed with his glory days playing high-school football.

According to him he would’ve “taken State” if only he was given the chance by his coach and put into the game in the 4th quarter. He also claimed that back in ’82 he “used to be able to throw the pigskin a quarter mile.”

We all know or have an Uncle Rico in our lives.

And I think for any former athlete reading – including myself, writing these words – it’s safe to say each and every one of us has a degree of Uncle Rico inside just itching to get out and brag about past athletic experiences, endeavors, and accomplishments.

I mean, not for nothing, back in high-school, during the sectional playoffs, my fastball was once clocked at “supersonic.” And I’m pretty sure the Matt Christopher classic, The Kid Who Only Hit Homers, was an unauthorized biography on my life as a Little League all-star.

Okay, not true at all. But I was a pretty good athlete – especially in my sport of choice, baseball.

I grew up in a small town in central New York and since the internet didn’t exist way back then, I spent the bulk of my time – particularly during the summer months – playing baseball; much of the time by myself.

I had the luxury of having a massive yard as my playground and I can’t begin to tell how many miles I must have walked back and forth hitting a baseball. I’d hit a baseball, chase after it, and then hit it in the other direction. Over and over and over again

I’d also long toss with myself in the same fashion. Throw a baseball, chase after it, and throw it again in the opposite direction.

If I had a FitBit to track things it would have been equivalent to walking across the country and back.

Also, I grew up on a lumbar yard so there were always stacks of boards or pallets lying around for me to toss a tennis ball or rubber ball against to practice my fielding.

And I even had a tire I hung from a tree I’d hit with an aluminum bat. As you can imagine, I was a blast to hang out with.

I played at the Junior Varsity level as an 8th grader, and was “called up” to Varsity as a Freshman at the end of the year to fill out the playoff roster. I even made it into a game, playing a half-inning at third base where 1) I was thiiiiis close to destroying the back of my pants and 2) assisting in a putout.

I played three years of Varsity baseball and had the honor of making it to the Sectional Finals twice (one step away from States) as well as being named Honorable Mention All-Star once (10th grade) and League All-Star twice (Junior and Senior seasons).

I have proof, too (from one of my old scrap books): 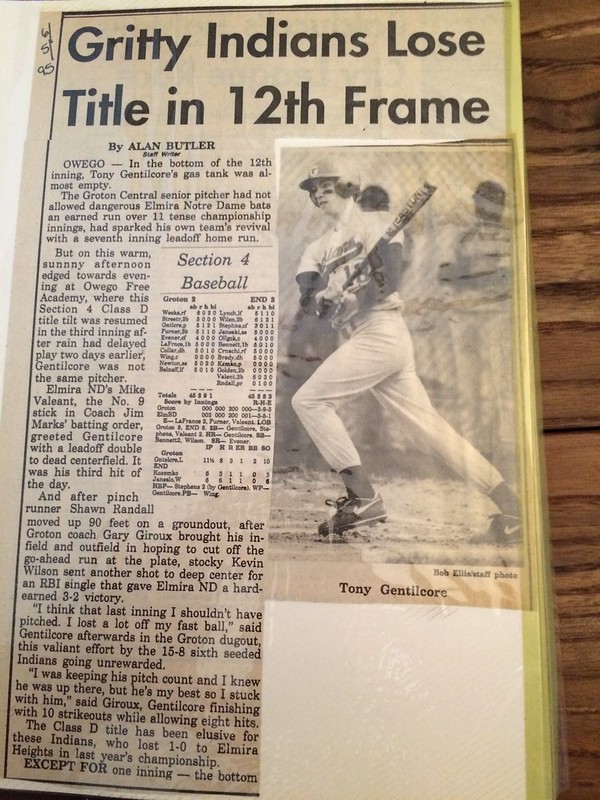 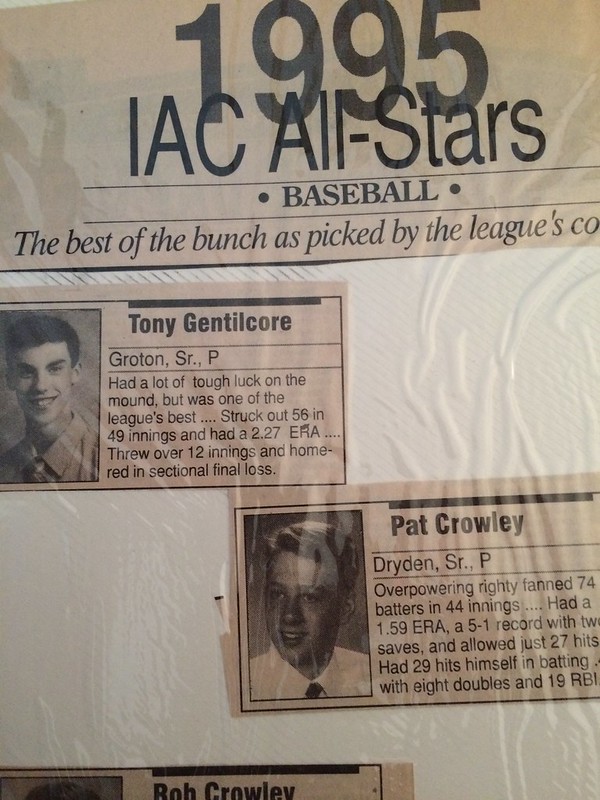 All along I had aspirations of playing at the collegiate level – Division I, of course. Thing is, my hometown was (and is) pretty tiny and smack dab in the middle of no where. Not many kids went on to play sports in college, let alone have the opportunity to play Division I from such a little known area.

I can probably count on one hand the total number of kids who went on to play any sport at the Division I level in my town’s history.

And I Was Somone Who Turned the Opportunity Down

However, if I went back in time and told 13 year old me the news I’d envision the interaction as follows:

“Wait, what? You mean we didn’t end up playing at Stanford? You played Junior College and Division II instead? And you chose to do that? WHAT THE HELL?!?! I HATE YOU. YOU’RE RUINING MY LIFE!!! [slams door.]”

I wouldn’t have been happy. Such is life.

Eric Cressey Tweeted this a few months ago:

Players need to get over D1 love affair. Many D2/D3 programs have produced big leaguers. It’s just a number; go where you can play/develop.

Coming out of high-school I was good, not great. I think you can tell from the pictures above I wasn’t a “beefy” kid. I was pretty ripped, though….;o)

I was skinny, not fully developed (athletically), and while a big fish in a small pond, raw and unchallenged as a whole.

Playing Division I right out of high-school wasn’t really an option, mostly because zero D-1 coaches came to see me play. Or D-II or D- III coaches, for that matter. One coach did however: Coach Joe Antonio of Onondaga Community College in Syracuse, NY.

NOTE: you can read more about my experiences there (and why Coach Antonio was a huge influence on me with regards to work ethic HERE).

At the time OCC was a Division I JUNIOR college and recruited many of the top high-school baseball players in the central NY region. Coach came to watch me, told me I’d have the opportunity to play every day if I made the team, and that I’d be offered a “book scholarship” to help sweeten the pot. I.e., via a grant I’d have my academic books paid for.

Long story short: I played two years at OCC, was named team MVP-Pitcher both years, and made the All-Conference and All-Region team my sophomore year. And I kissed a girl once.

After two years there I was offered a full scholarship to Marist College (Poughkeepsie, NY), a Division I school in the MAAC conference, but turned it down in lieu of heading to Division II Mercyhurst College (now University) in Erie, PA.

First off: kudos to any athlete who’s talented and fortunate enough to have the opportunity to play at the Division I level. That’s no small accomplishment and is to be commended.

That said, I do find it’s woefully OVERrated for many athletes.

1) I choose OCC mainly out of necessity (they’re the only ones who recruited me, and, admittedly, I was slightly terrified to leave home. Syracuse was only a 45 minute drive away). But also I knew I’d have the opportunity to play, and hence get better.

Going to OCC would allow me two years to accumulate playing time, experience, and build a little resiliency…

…something I feel is woefully lacking in many – not all – of today’s young athletes, who are told they’re delicate, special snowflakes who deserves to play, and if not, mommy and daddy will bring a firestorm of batshitcraziness.

On an aside: for those who feel it’s beneath them to play at the Junior College level, my first collegiate start was down in Florida against West Palm Community college who, I was told, 8/9 players in the starting line-up were drafted by an MLB team out of high-school.

For the record, I lost. And that team was stacked.

I can’t speak for other sports, but many, many coaches from 4-year schools prefer recruiting guys out of JUCO schools due to the maturity level and experience of the athletes.

On an aside (Part II): going to a community college out of the gate saved me (and my family) a ton of money. Two years at OCC was cheaper than ONE SEMESTER at most four year schools.

On an aside (Part III): despite what the internet – or weekend showcases tell you – most kids do not get full rides to play sports in school – there’s only a finite number each school/sport is allowed and the money is divided amongst all the players.

So there’s an inherent advantage in going to a place where you know you’ll play and where it’s cheaper.

Not paying off student debt for the next 10-20 years is worth it in my book.

And while a little off-topic, to all the Millenials boo-hooing over paying student debt: no one put a gun to your head to go to Harvard or Ithaca College or any other expensive school. Go where you can afford it. And if you do go to an expensive school, get a job and pay it off like everyone else.

I can’t reiterate this enough: if you’re good enough, you’ll get discovered – especially this day and age where players are more “accessible” via YouTube and social media outlets.

What’s more, as Eric’s Tweet noted above: there are plenty of examples of DII/DIII programs who develop Major League talent.

Case in point, Cressey Sports Performance, Jack Leathersich, who was drafted out of UMASS-Lowell (then D-II) in the 5th round in 2012, who made is MLB debut with the New York Mets this past season.

2) When it came down to choosing between Marist (D-1, full-scholarship) and Mercyhurst (D-2, half-scholarship) I had a few things to think about:

Not that it’s any surprise by now, I chose Mercyhurst2

I still feel going to OCC was 100% the best route for me to take, and I’d be lying if I said there wasn’t still a small part of me that wonders “what if I did go to Marist? What would have happened? Where would I be now?”

As luck would have it, when I arrived at Mercyhurst in the fall of 1997 the coach who recruited me to go there left to pursue another coaching opportunity. Awesome (<– that’s sarcasm).

Which then started a cascade of players leaving and the school scrambling to hire a new coach. I won’t go into the details, but suffice it to say, I was there for two years without a pitching coach and the team hovered around .500.

It was what it was.

The assistant coach at the time, Joe Spano, was hired as the head coach a year after I left and is now the program’s winningest coach (and fresh of the program’s first appearance in the World Series this past spring).

I was still fortunate enough to play collegiate baseball at a high level, and stuff that happened at the ‘hurst (not getting drafted) provoked me to pursue a different degree and finish school back in NY at SUNY Cortland.

I think things turned out okay.

But there’s still a little Uncle Rico in me that wonders “what if…….?”

I received a question recently via my Instagram DM’s and figured it prudent to take some time to write a more thorough response I could share with the masses here. 1. I hope it helps and makes sense. 2. Um, why aren’t you following me on IG? Here’s the question: “What is your response to… END_OF_DOCUMENT_TOKEN_TO_BE_REPLACED

Fitness professionals are notorious for myriad of things: Wearing sweatpants to work everyday. It’s definitely one of the perks of the job. Always forgetting about the protein shake shaker in their gym bag (or in their car) that invariably, three weeks later, ends up melting someone’s face off once it’s opened. Their affinity for smedium… END_OF_DOCUMENT_TOKEN_TO_BE_REPLACED