I’ve been laying low on the writing front lately recovering from last week’s launch, and realized I never took the time to say those two words.

Thank you to everyone who purchased the Complete Shoulder and Hip Blueprint last week. It was a surreal experience on my end to have so many people lend their support and say such kind things about the resource. As first product launches go I’d say it was a splendid success. I’d rank it somewhere between Miracle Mop and iPhone territory. Give or take a few dozen million units sold.

I may write something about my experience with the whole shebang down the road. I’ll discuss things like why I waited so long, why I chose this particular product, how Dean and I went about setting everything up for the launch, things I learned, mistakes I made, and whether or not I drank enough caffeine to kill a T-rex.1

Would that be something people would be interested in checking out and reading?

PS: psst, if you missed the party you can go HERE.

Stuff to Check Out Before You Read Stuff

I was a junior in college the last time they released an album. Well, shit. 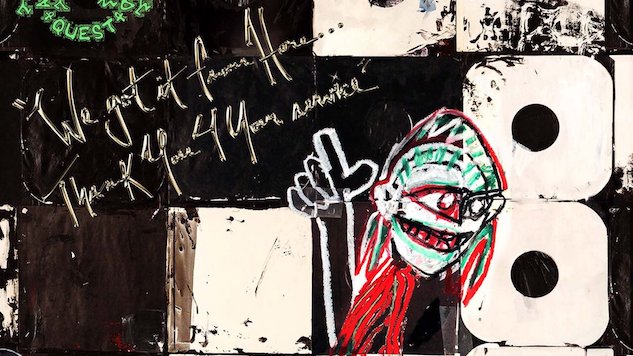 I grew up listening to 90s rap (and Tribe in particular) and remember the first time I listened to The Low End Theory…which I still feel is the best hip-hop album of all time and is still in heavy rotation for me. I can’t express how excited I am for this. I have a feeling that today’s squat sesh will be a good one.

2) I Am Not Afraid to Lift Retreat

It’s designed by women for women.

If you’re a woman and interested in being surrounded by other like-minded women in learning anything and everything with regards to kettlebell training, the barbell lifts, nutrition, and mindset strategies…this event is going to be right up your alley.

You can go HERE to check out more details.

If it’s any consolation I’ll be there too, but I’ll be on baby-watching duty. By the time this event happens Lisa and I will have a 4-month old, and I figure he and I can hit up the pool area or maybe head out to the Glute Lab and chill with Bret Contreras. My little guy has gotta learn about glutes sooner or later….;O)

Also, speaking of Artemis: she’ll also be hosting an Advanced KB Ballistic Workshop at my gym in Boston on Sunday, December 11th.

You can go HERE for more details and to sign-up (under EVENTS).

The Most Important Lesson From Lifting – T-Nation

A bunch of solid coaches – myself included – provide some of their “life-lessons” learned from years of working with iron.

Give it a read. There are plenty of inspiring insights.

This one is short, but so, so sweet.

Want to separate yourself from the masses…do this.

Prescribing a Walk in the Woods – Kevin Carr

Humans are designed to move. So, MOVE will ya.

Kevin Carr breaks down some of the science behind one of the most UNDERrated forms of exercise there is.

I see many of my colleagues doing this and figured I’d jump in on the action. You know, cause I’m important.

Friend to female client of mine: “You deadlift? What’s your goal, 185 lbs?

Front squats. The bane of my existence. I’ve never been sound with these and have never placed much emphasis on them in my training. And it shows. I suck at them. Well, as I tell my clients: “the only way you’re going to get better at something is by doing it.” And by following a program that someone else writes so you HAVE to do them….?. This was my 3rd set (of 4) of 4 reps with 250 lbs. Some cues I like to use with myself: 1) big air and brace like a mofo. 2) don’t pass out. That’s pretty much it. Funky beats optional. You can follow along with the program I am currently using at drjohnrusin.com/FHT-program and use the promo code TG10 to save some money. Maybe buy a bag or two of beef jerky. Scrumptious.

I received a question recently via my Instagram DM’s and figured it prudent to take some time to write a more thorough response I could share with the masses here. 1. I hope it helps and makes sense. 2. Um, why aren’t you following me on IG? Here’s the question: “What is your response to… END_OF_DOCUMENT_TOKEN_TO_BE_REPLACED

Fitness professionals are notorious for myriad of things: Wearing sweatpants to work everyday. It’s definitely one of the perks of the job. Always forgetting about the protein shake shaker in their gym bag (or in their car) that invariably, three weeks later, ends up melting someone’s face off once it’s opened. Their affinity for smedium… END_OF_DOCUMENT_TOKEN_TO_BE_REPLACED