Foam Rolling: This Is How We Roll

Foam rolling was never a “thing,” at least in mainstream fitness circles, until the early 2000’s. Since then it seems you can’t lift a weight or make a tuna salad without first taking yourself through a myriad of foam rolling drills to ensure “safety.”

Do I have my clients foam roll? Yes. Do I feel it’s imperative? It depends. In today’s guest post by Dr. Nicholas Licameli, he sets the record straight on what foam rolling is and what it isn’t Foam Rolling: This Is How We Roll

In the fitness world, foam rolling has become just about as popular as yoga pants, bright stretchy shirts with motivational and quirky quotes, and transformation pictures on Instagram. That being said, a foam roller can be an effective tool, if used correctly.

Some buzz terms you may have heard when it comes to foam rolling are muscle lengthening, breaking down scar tissue, freeing up adhesions, remodeling of collagen, curing cancer, etc., however recent research does not support these claims as the mechanism by which foam rolling works.

In reality, we as humans cannot produce the amount of force necessary to remodel our tissues. Our tissues are much more resilient than that. It actually takes thousands of pounds of force to accomplish this, which is probably a good thing because we don’t want our tissues breaking up or remodeling when we’re carrying groceries, sitting on a park bench, squatting with 500lbs on our backs, or anytime we put weight into them.4,5,8

Last time I checked, no one is foam rolling with that much force!

But…We Feel Better and “Looser” After We Foam Roll. Why????

The mechanism by which foam rolling works seems to be neurophysiological rather than physical.

This means that foam rolling induces a global decrease in muscle tone. Muscle tone is the continuous passive contraction of a muscle controlled subconsciously by the brain. In other words, it’s a muscle’s resistance to passive stretch. Tone is created by a constant subconscious message from the brain telling a muscle to contract. Many times the sensation of muscle “tightness” has more to do with tone and less to do with actual muscle length.

This is similar to how pain is perceived. Pain is a sensory input. Foam rolling adds a sensory input (the pressure) to override another sensory input (tightness or pain) to disrupt that subconscious message between the brain and the muscle to contract or perceive pain.1,6,8 This is why we feel better, looser, and less pain after foam rolling.

A Word (Or two. Or three.) On the Iliotibial Band (IT-Band)

By understanding the neurophysiological mechanism by which foam rolling works, it is now clear why you should NEVER FOAM ROLL THE IT-BAND.

The IT-band is a long tendon that has connections to the hip musculature, lateral quads, and lateral hamstrings…but it is only a tendon, not a muscle.

It is not made up of contractile tissue and therefore cannot have tone. The IT-band becomes tight as a result of increased muscle tone of its muscular attachments.

The same goes for the IT-band. To improve IT-band tightness with a foam roller, focus on the hip musculature, lateral quads, and lateral hamstrings. By rolling directly over the IT-band, you are only causing yourself pain, which is most likely causing a global increase in muscle tone throughout the body.

Great Let’s Get Rolling! I’m Going to Foam Roll Every Muscle of My Body 3x/day For the Rest of My Life!

The above-mentioned benefits of foam rolling seem to be very short lived. If you spend 10, 20, or 30 minutes foam rolling different muscle groups, by the time you’re done, you’ve likely lost the benefits of the first 5-10 min.

Although the research has not shown an optimal dosage for foam rolling, it has been shown that short bouts of 10-60 seconds is effective.7,8,9 That being said, do not focus on time. Focus on “feel.” Feel that muscle release!

Once you find a tender spot, pause and hold on that spot until a release is felt and the tenderness lessens. Follow this up with another slow, steady roll over the entire muscle just like you started. It is true that foam rolling should be a bit painful, but too much pain will cause an increase in muscle tone, which, as previously mentioned, is exactly the opposite of what we want to do.

More pain is not better. Better quality is better.

Test/retest means you test a movement (like a squat) before and after performing soft tissue work to determine if there was any significant change. A useful way to do this is between warm up sets.

So I Understand That the Benefits of Foam Rolling Are Relatively Short Lived, but Can Foam Rolling Help Achieve Long-Term Improvements in Tissue and Movement Quality?

That is where loaded movements come in. During the window following foam rolling, it is important to load the movement that you are trying to improve. This is why I recommend performing soft tissue work between your warm up sets.

It will allow you to test/retest as well as gradually load the movement, given you are gradually increasing load with each warm up set.

Take a squat for example. 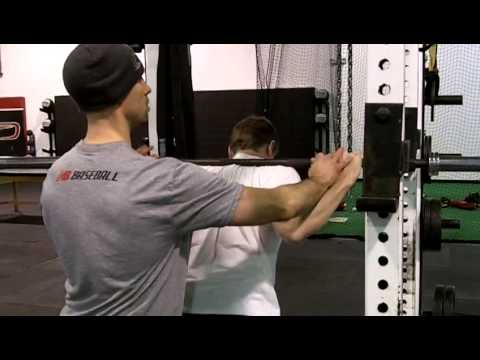 You feel tightness and restriction in your hips halfway into the descent of your squat. You test and retest your squat and notice you are able to squat deeper and with less tightness. As you load the squat and work up to your working/heavier sets, this newly achieved movement pattern will be trained.

Training this movement with loads will, over time, lead to long term improvements in tissue and movement quality.2,8   Foam rolling can also be a great way to kick-start the recovery process by tapping into the parasympathetic nervous system, but that’s for a different article.

So do not fall victim to the latest trend or claims from gurus. I hope this helps shed some light on what foam rolling is, what it isn’t, how it works, and how to implement it into your training routine. Nick’s passion lies between his love for the journey of bodybuilding, education, spreading happiness, and helping others. He views bodybuilding through the eyes of a physical therapist and physical therapy through the eyes of a bodybuilder. Nick is a doctor of physical therapy and professional natural bodybuilder. He graduated summa cum laude from Ramapo College of New Jersey with his bachelor’s degree in biology, then furthered his education by completing his doctoral degree in physical therapy from Rutgers School of Biomedical and Health Sciences (previously the University of Medicine and Dentistry of New Jersey) at the age of 24. His knowledge of sport and exercise biomechanics, movement quality, and the practical application of research combined with personal experience in bodybuilding and nutrition allows him to help people in truly unique ways. Passion. Respect. Humility.

If you train people for a living, read this. Don’t Guarantee Results It’s seems counterintuitive, maybe even borderline asinine, not to guarantee your clients results, right? I mean, what the hell are they hiring you for? HINT: It’s not to trade baseball cards or tickle fights. I had a new client start with me recently… END_OF_DOCUMENT_TOKEN_TO_BE_REPLACED

There was time in my blogging career where I’d be more apt to dedicate writing energy toward topics like “Top 5 Carrie Bradshaw Breakups” than anything related to business, let alone taxes. However, a major mishap I made back in 2007 when I transitioned to being self-employed made me change my tune quickly.  Let’s just… END_OF_DOCUMENT_TOKEN_TO_BE_REPLACED