Why I Prefer Training Women

I recognize the title of this post can be a bit misleading; as if to imply I don’t like training men. This is not the case. I mean, I spent eight years of my career at Cressey Sports Performance training predominantly men (baseball players). They were all lovely, if not a bit overzealous with the Axe Body Spray at times.

What’s more, given half the population on Earth has a Y chromosome it should come as no surprise that 50% of my current clientele at CORE are the proud owners of a “boy down there part.” Although I’m sure if I crunched the numbers the percent breakdown of female/male clients would skew a little higher on the female side.

Back in 2002, at my first job in corporate fitness, it didn’t take long for me to “recruit” a few women and to introduce strength training to them. The guys, for the most part, didn’t need much egging from me to pick up a barbell. Like me, they had been indoctrinated and encouraged at an early age – mostly as a result of watching Predator 3,987 times – to lift weights.

Most were lifting weights to some capacity already.

Because that’s what guys are supposed to do.

For the women, though, not all of them of course, the story was a bit different. Most were never encouraged to lift weights, and if they were it was always directed towards machines or “girl exercises.” A Quick Aside (WARNING: you may want to drop kick something after reading this it will make you that angry): This reminds me of a story a female colleague of mine once told me about a local high school here in Massachusetts. She had offered to help out in the school’s weight room during the summer months and had asked the Athletic Director (a woman, who also happened to be the varsity coach for several of the women’s teams) if she could “target” the young girls and attempt to set up a strength training program geared towards them.

The AD said something to the effect of:

“Oh, well, you can try but it won’t do much good. The girls here aren’t interested in weight training and tend to only use the cardio machines. Besides, there aren’t any “female friendly” machines available.”

Mind you, she said this with 10+ empty power rack stations behind here.

This was the ATHLETIC DIRECTOR (Remember: a woman no less) saying something so egregious and asinine.

Is it any wonder then, after hearing that kind of bullshit, why so many young girls grow up thinking they’re not supposed to lift weights and that it’s just something guys do? And why many take the same mindset into adulthood?

Thanks for nothing worst athletic director ever.

So anyways, back to 2002, I started working with a lot of women and slowly but surly began to “de-program” them and helping them learn to debunk many of the common fitness myths they had fallen prey to: 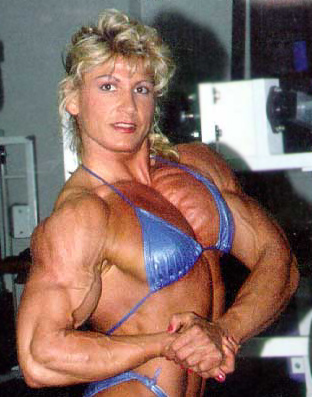 This last point brings up a whole nother conversation of, 1) “Who gives a flying fuck if someone wants to look like this?” and 2) even if it is an admittedly extreme example, it implies the connotation that having any semblance of muscle is NON-feminine..

However, I hope most of you reading recognize the larger point I’m trying to make: that it’s not uncommon for women to think the above picture is the end result of performing a few sets of deadlifts over the course of a few weeks.

It was very rewarding to start working with those women early in my career and to watch them make amazing progress in their strength – not to mention their confidence in themselves – and to finally see that switch turn on to where they wanted to work towards more performance based goals rather than worrying about aesthetics or looking a certain way to fulfill some BS societal norm.

Fast forward through a few girlfriends and questionable fashion choices on my end…to my time at Cressey Sports Performance. During my time there I worked with countless women, even started a “women’s only” training group (for beginners), and helped to procure an environment and culture where training was training regardless of gender.

Girls didn’t train any different than the guys.

We didn’t make it a “thing.” Girls just, you know, trained. And became badasses.

Fast forward, again, to today. I have my own studio in Boston (okay, technically, Brookline) and I still follow the same mantra as above: women, outside of a few circumstances, do not need to train differently then men.

I’m very fortunate in that I’ve been able to generate enough of a reputation (and following) that when women do reach out to me for coaching they tend to know what they’re getting themselves into.

But that doesn’t mean I still don’t have my work cut out for me at times. Just the other day I came across this article while I was in the waiting room at the dentist’s office:

The article implies that foam rolling leads to “lengthening” of muscles and a leaner look (because, you know, it’s foam rolling, not calories in vs. calories out that gets rid of fat).

It was all I could do not to want to run through the pane glass window to my left when I saw this.

This. This is why I prefer working with women.1

So I can help serve as a counterpoint or antithesis to the garbage that’s directed their way in much of (not all) of the mainstream media.

I’ve been a fan of “offset” loading for a number of years now. Without getting too deep in the weeds on what offset loading is and what the benefits are… …it’s when you either stagger your foot or hand position on certain exercises OR you load an exercise a certain way (how you hold a… END_OF_DOCUMENT_TOKEN_TO_BE_REPLACED

Last week I received an email from Jon Goodman. At first I thought he was going to extend an invite to me to come up to Toronto for a weekend of watching Jean Claude van Damme movies. But that wasn’t the case. Fingers crossed for next time. Nope, instead Jon was curious if I’d be… END_OF_DOCUMENT_TOKEN_TO_BE_REPLACED