The Deload Week: Yes, No, Maybe So?

Outside of several other health/fitness arguments – steady state cardio vs. HIIT, low bar vs. high bar squats, weight belt vs. not wearing weight belt, Paleo vs. eating like a normal human being with a life, blue yoga pants vs. black – there aren’t many topics which rev people up or bunch panties more so than the deload week.

Some people believe they’re crucial for long-term progress, while others feel they’re a complete waste of time? What Is This “Deload” You Speak Of?

For the uninitiated, in simplest terms, the deload week or “deload” is a purposeful, structured, and oftentimes planned reduction in training volume or intensity (or both) with the intention of improving performance, recovery, and/or injury prevention.

The concept has its roots via the Fitness-Fatigue Model (or, Two-Factor Theory Model) popularized by I have no idea (probably some Russian dude, they’re smart) and is a tool used to help optimize an athlete’s preparedness for training, and subsequently effect their ability to “peak” or perform at a high-level in his or her’s respective sport.

Feel free to peruse Wikipedia – or any number of my friend’s and colleague’s websites – for a more thorough, eloquent, and potty-mouth free explanation.

However, in even more simpler terms the Fitness-Fatigue Model can be explained as follows: you lift heavy shit in the weight room and you either build “fitness” or accumulate “fatigue.”2

Broadly speaking deload weeks are widely accepted as most “relevant” for a few demographics:

If you’re a competitive athlete with an in and off-season and your livelihood relies on your ability to perform at a high level or you’re someone who’s strong AF, it’s likely you’ll benefit from a healthy diet of deload weeks.

On the other hand, if you’re Dale from accounting and you spent two weeks on 5/3/1 or, I don’t know, took a CrossFit class two days in a row, relax, you don’t need a deload week.

I tend to agree with strength coach Mike Ranfone:

“Deloads are like cheat meals everyone wants one but not many have earned one.”

In reality, though, the real best answer as to whether or not a deload is warranted is: it depends.

I mean, if you want to keep things as succinct as possible look no further than a brilliant quote I stole from Molly Galbraith (courtesy of Greg Nuckols):

For Shits and Gigs Lets Dig a Little Deeper

Jordan Syatt has written in the past regarding the idea of the traditional deload and why he feels it’s a bit misguided to assume everyone needs to follow it.

In short, a traditional deload encompasses a full-week of pre-planned reduction in training preceded by three weeks of intense training. The deload week usually involves using submaximal loads (40-60%) and can also include nothing more than dedicated mobility/activation work, bodyweight drills, or, for those inclined to do so, Netflix and Chilling.3

An important distinction Jordan makes is that the traditional deload (three weeks “on,” one week “off”) doesn’t always fly or serve people’s best interests:

“Not only does it neglect individual needs and preferences, it fails to account for inevitable variances in how you feel on a day-to-day basis.

Cybernetic periodization, a term coined by the late Mel Siff, essentially refers to accounting for and modifying your program based on your subjective perception of how the weights feel on that specific day.

This skill, learning how to listen to your body and understand what it needs based on how you feel, is arguably the single most important skill to master for both coaches and lifters a like.

Often times this approach can derail one’s training mojo. Just when someone is starting to make decent progress in the gym and starting to move some appreciable weight, and despite feeling great on any particular day and ready to get after it, they tap the brakes too soon and toss in a deload week.

You know, because that’s what’s supposed to be done.

NOTE: Admittedly, from a programming perspective, regardless of most variables, it’s not uncommon for me to toss in a “fake” deload week every fourth week. Part of it is because of how I prefer to write the bulk of my programs.

Each one is written in four-week blocks (in terms of overall training volume):

And then the following week after that a “new” program starts and the intention is the client/athlete feels “fresh” to handle the additional volume and/or handle the novelty of any new exercises that may be thrown their way.4

Of course, this is not set in stone. Someone who’s training 2-3x per week as it is probably doesn’t need a dedicated deload week every fourth week. In this case it may be extended to every six to eight weeks, if not more. It depends….;o)

In addition, from a business and gym owner standpoint, the Week 4 “fake deload” subconsciously primes people into preparing for the next program.

If we’re honest: most people don’t work hard enough to warrant a deload.

Some people will use any excuse – they had one hard workout, they strained a little bit and their neck vein appeared, it’s Wednesday, anything – to not work hard.

“Life will sprinkle in more than enough deloads. I’ve always found too many people take a deload right when they start making progress. They get the slightest bit uncomfortable, or they think they need to be on some three week on, one week off deal…and in pops a deload that’s more a derail of progress.”

As an industry we jest that “cardio will steal your gainz.” I’d posit that “you’re lack of making gainz (via incessant training deloads) is stealing your gainz.”

However my sentiments tend to mirror that of many other coaches:

Even with my most consistent and dedicated clients they’ll still miss some time every month due to work or vacation or any other legitimate reason (Laser Tag Tournament?).

If it’s been 6-8 weeks of heavy training, I’ll incorporate a low(er) volume/intensity week and we’ll turn the page and get back after it the following week.

Heck, sometimes a client will walk in on a random day and I know he or she is not feeling it. When that happens I’ll gauge biofeedback and ask questions about sleep, how they feel, etc and adjust accordingly.

Again there’s no one-size-fits-all approach here, but below are some of my favorite options:

I find the term overtraining is drastically overused. Most trainees don’t come close to overtraining, but if they do volume is usually the culprit. To that end my “go to” deload strategy is a simple one.

3. Perform bodyweight only circuits for a week. Use the week as an opportunity to re-charge and prioritize mobility/activations drills like this:

4. Toss in a training curveball. Change up your training entirely. Instead of focusing on the “Big 3,” maybe do a body-part split for a week. Mentally this is huge.

5. Along the same lines maybe a deload week is nothing more than omitting all axial loading exercises.

Give your joints (particularly your spine) a break.

6. Some coaches use the deload week as a “Test Week.”

Meaning, choose one lift per session and go to town. Hit a top set (or maybe a PR?), drop the mic, and peace out. 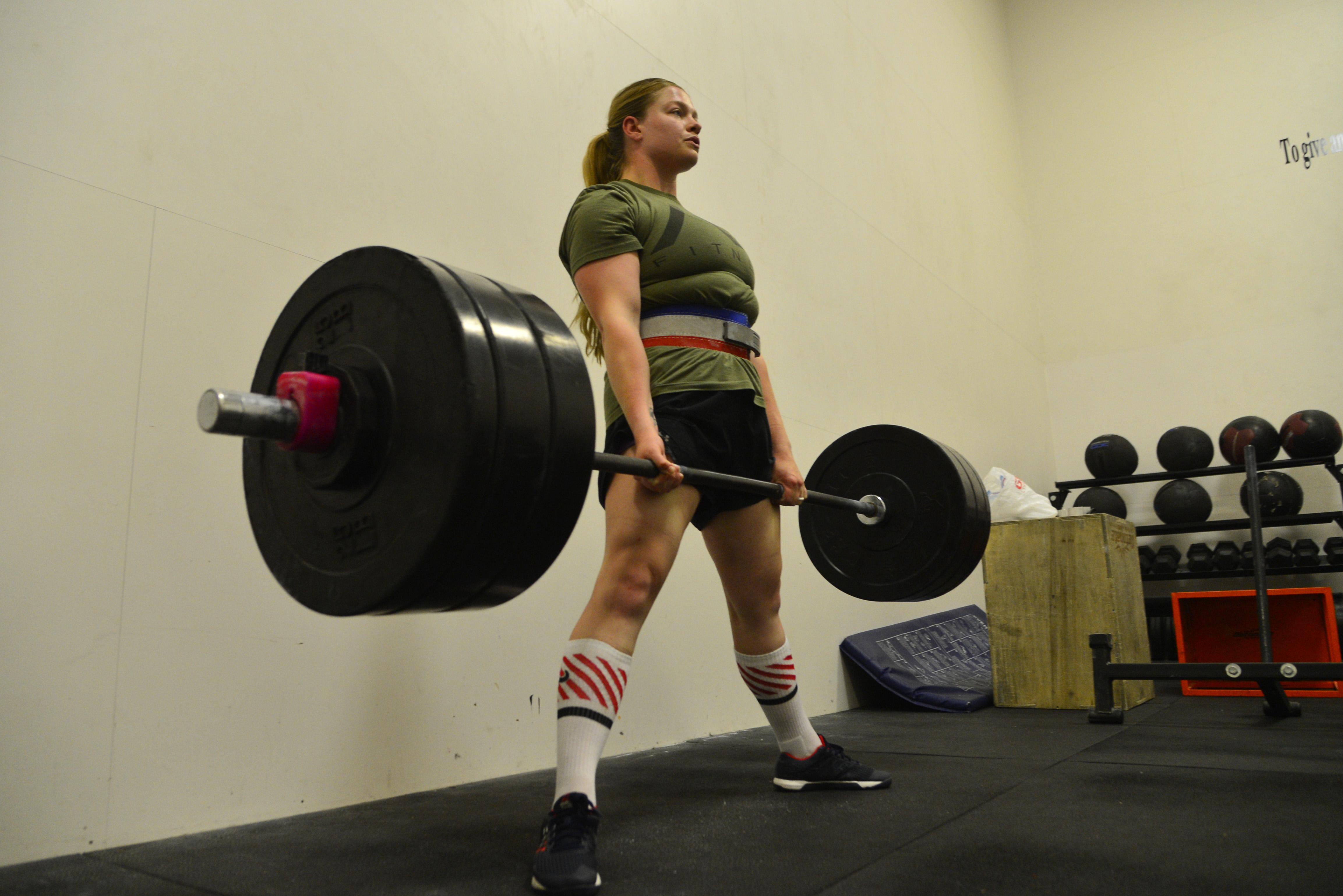 Go outside and do some agility work (skipping, sprinting, etc).

Play around with some sled work KB swings.

Like I said, there’s no right or wrong here. Have your own strategies to share? I’d love to hear about them.

Hello, hello! I know. It’s not lost on me that I’ve been an abject failure on the “writing new content” side of things. If it’s any consolation I’ve also been lackluster on a few fronts: Calling my mom. Avoiding pizza. Not (not) being jacked. Hugs. My free time has been monopolized by what can only… END_OF_DOCUMENT_TOKEN_TO_BE_REPLACED

My good friend and colleague, Gavin McHale, is back with another excellent guest post today. He’s been on a tear of late writing some stellar content for this site. We’re all our own worst enemy, and for many, stepping outside our comfort zones and taking risks (calculated or not) in an attempt to grow our… END_OF_DOCUMENT_TOKEN_TO_BE_REPLACED