Defending Spinal Flexion: It’s Not Always the Evil Step-Child We Make It Out to Be

No offense to my future wife (t-minus 37 days until the big day), one of the greatest days of my life was the day I got my first Atari 26001 My game of choice: Defender.

The premise was/is simple: your planet is under invasion by waves of aliens and it’s your mission to “defend” it, as well as other astronauts.

Like many other fitness professionals a few years back, I jumped onto the anti-flexion bandwagon.

I mean could you blame me?

Gulfs of research – in addition to anecdotal evidence – suggest that spinal flexion has its downfalls. To be more precise, however, I should state it’s repeated spinal flexion (and extension) taken into end range that’s the real culprit. Do that on a consistent basis, let it marinate with little to no strength training, and you have the perfect recipe to herniate a disc.

And as my boy, Eric Cressey, notes:

“If you want to see a population of folks with disc herniations, just look at people who sit in flexion all day; it’s a slam dunk.”

Of course, this doesn’t automatically equate to someone being in pain or complaining of back issues. There are plenty of people walking around with not one, but maybe even two, levels of herniations or disc bulges in their spine. And they’re fine.

In fact, in a landmark study published in 1994 in the New England Journal of Medicine, researchers sent MRI’s of 98 “healthy” backs to various doctors, and asked them to diagnose them.

– 80% of the MRI interpretations came back with disc herniations and bulges. in 38% of the patients, there was involvement of more than one disc.

And these were considered “healthy” backs, and those of people walking around with no symptoms what-so-ever.

Which goes to show: I’d trust an MRI about as much as I’d trust a barber with a mullet.

NOTE: this isn’t to insinuate that MRIs are a waste of time or aren’t valuable. That’s 100% false. But I’d be remiss not to state that we, sometimes, place far too much precedence in them.

Oftentimes leading to unnecessary surgery (which should be an absolute LAST resort).

Long story short: just because someone flexes their spine – and may or may not have a disc herniation – doesn’t mean their spine is going to explode.

And least we forget the Godfather of spinal mechanics and research Dr. Stuart McGill. The man has forgotten more about the spine than any of us could ever hope to remember. I’d be lying if I said his two books – Low Back Disorders and Ultimate Back Fitness and Performance – haven’t shaped most of my thinking and approach when working with clients and athletes with low back pain.

Who the hell am I to disagree with him?!?!

That would be like me starring Yoda in the face and saying something like, “Pffft, whatever dude. Force schmorce. What do you know??” 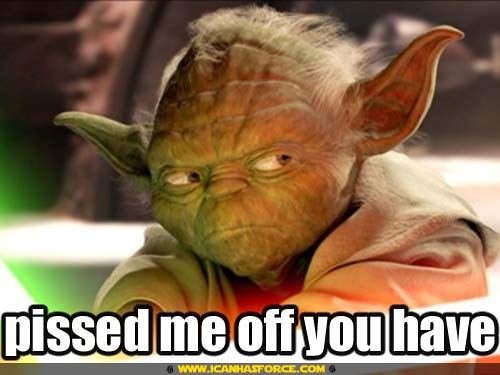 With that commentary in mind, as a fitness professional, most of the time (but not always), I’m not going to go out of my way to include more exercises or drills that place people into spinal flexion.

Particularly with the aforementioned “people who already sit a lot and live in flexion” scenario from above.

Taking it a step further (and to help appease those people who are probably hyperventilating into a brown paper bag reading this, assuming I’m saying spinal flexion is okay):

I typically avoid the following:

2. Lumbar flexion exercises for those who are “stuck” in flexion.

But Just to Play Devil’s Advocate For a Second

With point #3 – loaded flexion – there are some people out there who purposely train with a rounded spine and do very well.

Lets use the deadlift as a quick example.

We could make the argument – from a bio-mechanical standpoint – that a rounded back deadlift is efficacious because it’ll allow you lift more weight.

As Greg Nuckols explains in THIS amazing article:

“Rounding your back a bit shortens the length of the torso in the sagittal plane.  In non-nerd speak, it lets you keep your hips closer to the bar front-to-back so they don’t have to work as hard to lift the same amount of weight.”

The picture on the right depicts a “neutral spine.” Taking natural kyphotic/lordotic curves into account, on the right, “neutral” equates to a spine that’s 15.3 inches “long” front to back.

On the left, with some significant rounding – albeit in the THORACIC spine (more on this point in a bit) – the the length of the spine is reduced to 11.7 inches. I.e., the hips are closer to the bar.

This in mind, if you watch elite level powerlifters you’ll notice that many of them do seem to “round” their back on max effort pulls.

But lets put things into context

A). It’s important to understand that for most, the rounding is happening in the t-spine and NOT the lumbar spine. The T-spine has more “wiggle room” in terms of end-range flexion compared to the lumbar spine.

B) They’re NOT rounding their lumbar spine.

C) Pulling 600+ lbs is heavy as f***. You try pulling that much without some rounding.

D) Guys (and girls) who are strong enough to be pulling 3-4x bodyweight have assuredly trained themselves to stay out of those last 2-3 degrees of end-range flexion. Moreover, they’ve also been in compromising positions enough that they’re able to stay out of the danger zone.

E) More importantly, you’re (probably) not an elite lifter, so I wouldn’t suggest you start training with a rounded back.

Neither are a good idea. Except for the second one.

When Is Spinal Flexion Okay?

Let me repeat, I generally avoid:

2. Lumbar flexion exercises for those who are “stuck” in flexion.

I BOLDED #2 because, well, I work with a lot of athletes and people who are the opposite. They live in extension and excessive anterior pelvic tilt, which can be just as deleterious for the spine as flexion.

I BOLDED “excessive” because I want to make it clear that anterior pelvic tilt is not a bad thing (it’s normal). And because some people are morons, will miss the bolded EXCESSIVE, and will still send me a note via email or social media saying how dumb I am for saying APT is bad for the spine. People on this side of the fence face a whole host of other scenarios like Spondylolysis (referred to as an end plate fracture, most often on the pars interarticularis), Spondylolisthesis (forward disc slippage), femoral acetabular impingement, and what I like to call fake badonkadonk-itis.

In other words: some people don’t have a big butt, they’re just rockin some serious APT.

Kidding aside, extension-based back pain or extension-based issues are no laughing matter, and it’s in scenarios like these where spinal flexion is warranted (and encouraged).

This is where were start to dive into the PRI (Postural Restoration Institute) philosophy and discuss breathing and how it affects pretty much everything.

Many of the (breathing) drills we use at Cressey Sports Performance place people (people who are overly extended) into spinal flexion, which is a good thing.

Watch this video below and you’ll get a sense of what I’m referring to.

Learning to perform this exercise correctly (getting to and maintaining neutral spine) is a game changer for anyone experiencing low-back pain regardless of whether it’s a flexion issue or extension.

However, I rarely ever see anyone perform this exercise right. Most people start in a okay position for about five seconds, but then quickly “fall into” an excessively extended posture where their head protracts towards the floor and/or their entire spine sags, essentially doing nothing but hanging onto their passive restraints and hip flexors.

The “core” isn’t doing anything.

Not coincidentally these are the same people who brag about being able to perform a plank for [insert pointless amount of time here].

People who brag about being able to perform a 60s RKC Plank (easily), clearly, are NOT doing it correctly. Basically you’re full of s***.

When done correctly – I prefer an RKC style plank: feet together, palms flat, elbows being pulled towards toes (to increase tension), and fire everything (glutes, abs, quads, nostrils, everything) – the amount of time someone can perform it is drastically different.

20 seconds and you should be hating life.

You may also notice that I’m rounding my (upper) back above. This is on purpose and goes against conventional wisdom.

I like to start people in a bit of flexion – especially those who are overly extended – because as fatigue kicks in they’ll end up in neutral (rather than past it).

I’ve been a fan of “offset” loading for a number of years now. Without getting too deep in the weeds on what offset loading is and what the benefits are… …it’s when you either stagger your foot or hand position on certain exercises OR you load an exercise a certain way (how you hold a… END_OF_DOCUMENT_TOKEN_TO_BE_REPLACED

Last week I received an email from Jon Goodman. At first I thought he was going to extend an invite to me to come up to Toronto for a weekend of watching Jean Claude van Damme movies. But that wasn’t the case. Fingers crossed for next time. Nope, instead Jon was curious if I’d be… END_OF_DOCUMENT_TOKEN_TO_BE_REPLACED