Counting today’s post, four out of my last five entries have had a number included in the title. That’s never happened before.

Nevertheless, in conjunction with Dean Somerset putting his Ruthless Mobility resource I sale TODAY (through July 4th) I wanted to share a few thoughts on the topic (mobility/movement/general badassery) that maybe some of you reading would find useful or interesting or mildly captivating.

Captivating like this picture of a kangaroo punching someone in the face:

1. Anterior Pelvic Tilt Doesn’t Always Have to be Fixed, Nor Is It Bad. Everything Will Be Okay. Seriously.

New Client: “I’m so excited to work with you. I was told by my previous trainer I had anterior pelvic tilt.”

New Client: “Well, I went in for my assessment and he told me I had anterior pelvic tilt and that it needed to be addressed and that he’d write me a program to fix it.”

New Client: “I worked with him for eight months, and I don’t know if it was fixed. All I know is that we did a metric shit-ton of stretching, corrective exercise, and very little strength training.”

Me: “Well, that’s unfortunate. Excuse me while I go toss my face into a brick wall.”

Okay, the brick wall comment didn’t really happen…but everything else stated above was said verbatim as I sat down with a new client recently.

Without going into the particulars I went on to state that roughly 7 billion other people in the world “suffer” from anterior pelvic tilt, and that it’s truly reached pandemic levels of clusterfuckedness.

In short: I explained that, aside from scenarios where excessive anterior pelvic tilt may be causing pain or movement dysfunction, having it was not a disease or a scenario which always required intervention.

In fact, APT is considered anatomically neutral. I.e., Your lumbar spine has a natural lordotic curve.

As I recall, there’s no definitive test or “screen” which can correlate “x-degrees” of APT and one’s vulnerability to pain and dysfunction.

Some people have APT and walk around in considerable pain, while others have APT (even excessive APT) and have no issues what-so-ever.

However, those coaches with an acute eye for assessment and movement can often use a plethora of screens and tests to ascertain whether or not APT may be something that’s needs to be addressed.

@bensy8585@tonygentilcore1 It needs to be controlled when necessary. Ex: squatting in APT = poor pattern. PPT to neutral, squat cleans up.

To reiterate, APT is not always wrong (or bad)…but it can be problematic once we start allowing ill-prepared people to load the pattern and not only that…begin to add repetitions and/or speed.

Often, it’s the LACK of ability (or our proclivity to refrain from) posteriorly tilting the pelvis when bad things start to happen.2

As Tony B mentions above: There’s a big difference between cueing someone to arch like crazy (and thus encouraging excessive APT, resulting in poor positioning and increased instability) and cueing someone to posteriorly tilt the pelvis to nudge them into a more neutral spinal position.

NOTE: As Mike Robertson notes in THIS article, there is no such thing as a bad cue. However, there does exist poor cues when they’re not applicable to the individual or are used haphazardly (because you heard someone else use it).

A huge shout-out to Mike Reinold for hammering this point home in a recent Inner Circle I watched on How to Improve Thoracic Extension.

Mike noted that in order to improve t-spine extension it is important to work on mobility (Windmills, Bench T-Spine Mobilizations, Quadruped Extension-Rotations, etc), however we can’t dismiss the importance of ENDURANCE in order to maintain it.

Mike also noted that with regards to posture, “sitting upright is fictitious.” The amount of hours many of us spend in a flexed position far out-weigh the number or hours we’re upright. As such, keeping an upright posture is freakin exhausting.

My words, not his.

Don’t get me wrong: strength is (and always will be) important. A healthy dose of horizontal rowing (DB rows, seated rows, chest supported rows, Seal rows) is never a bad thing.

However, when we’re talking about our “posture muscles” – the muscles that need to be on all day in order to keep us upright – endurance is the name of the game.

3. Lack of ROM Isn’t Always Because You Need to Stretch More

The second someone is told that they lack range of motion (ROM) in any part of their body, they’re immediately shown 37 different stretches and ways to “smash” their tissue.

Many end up cranking this joint and yanking that joint till their blue in the face.

One of the more common examples I like to use here is lack of shoulder flexion (or ability to elevate the arms above one’s head).

Many people are unable to do so without some form of compensation via forward head posture, rib flair, and/or excessive lumbar extension. Picture on the left.

The fix can be any number of things: addressing lat length, fighting a zombie, poor anterior core control, poor tissue quality in the pecs/pec minor, you name it.

And none of those approaches would be wrong. Fighting zombies is awesome.

However, stretching tends to be the “go to” modality for many fitness professionals, and frankly it isn’t always the answer.

Oftentimes, taking the time to teach people to get 3D expansion of the rib cage with their breath (front, side, and into the back) and then learning to fully exhale (to get rib cage down and promote better engagement of anterior core) will help to “open up” the thorax.

I can’t tell you how many times I’ve tested someone’s shoulder flexion and saw an immediate 10-20 degree improvement after having them perform ten good breaths.

I call it my Gandalf moment.

Except, you know, I’m not a wizard.

Did Someone Say Gandalf?

For more insights on the topic and wizard-like shenanigans I’d recommend checking out Dean’s Ruthless Mobility.

You get FIVE hours of content (digital or DVD) from one of the smartest coaches I know on assessment, corrective exercise, and how to get people moving better.

What’s more, CEUs are available AND it’s on SALE at close to 50% off the regular price. 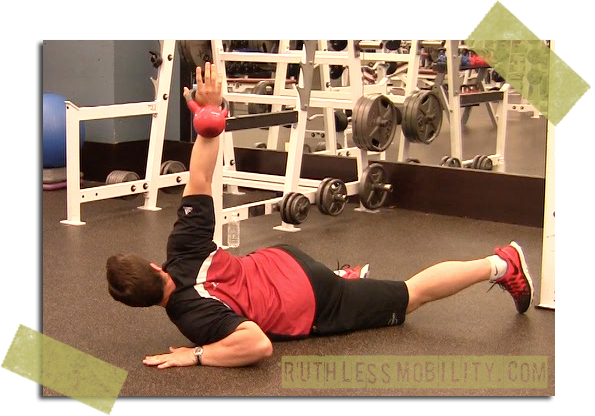 Go HERE and thank me later.

Fair warning: This will not be an all-encompassing post on how to train the shoulders or how to program around nagging shoulder injuries. Frankly, I don’t think anyone wants to read a Dostoyevsky length diatribe on shoulder impingement or how improving scapular upward rotation leaves me sexually aroused. Yep, I’m weird. Instead I want to give… END_OF_DOCUMENT_TOKEN_TO_BE_REPLACED