Stuff to Read While You’re Pretending to Work: Chest Builders, Tickets to the Gun Show, and New Blogs

A while back I was contacted by the editors of T-Nation to contribute to an article specifically geared towards people interested in pull-ups:  how to not suck at them, how they can go about building a back wider than Kansas, you know, stuff like that.

It went over really well, so the higher-ups at T-Nation decided to ask the same crew to write their thoughts on chest training, and this was the end result.

I was truly honored (and humbled) to have my blog listed amongst so many other esteemed health and fitness professionals.  As it turns out, many of the blogs I follow on a consistent basis (Mark’s Daily Apple, Bret Contreras, Adam Bornstein, Eric Cressey, Kellie Davis, Girls Gone Strong, to name a few) made the list, which doesn’t really surprise me because they’re all fantastic.

But it was nice to get e-introduced to a number of other blogs that are equally as awesome and badass.

Maybe you’ll find one on the list you’ll enjoy?

Honestly, Dan had me a “Gun Show,” so I’m already in and an easy sell.  But in case you’re not up to snuff with broscience lingo, my good friend Dan Trink, Director of Training at Peak Performance in NYC and co-author (along with me) of the first three month’s of programming for Greatist’s Workout of the Day (GWOD), released his very first fitness product this week that’s a 4-week arm specialization program.

For those who don’t know Dan, he’s a brick shit-house and has arms bigger than both Optimus Prime and Megatron combined. 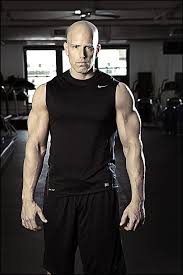 But he’s also one of the nicest and most down-to-earth human beings I know.  Not that that really matters when purchasing a product, but I just thought you should know….;o) I generally shy away from people who are a-holes, let alone endorse their products.

Anyhoo:  As a dude, I know the first thing I do when “sizing up” other dudes is to look at the size of their arms. While it doesn’t necessarily tell me much in terms of how strong they are (or if they have some super secret Jedi mind trick powers that I don’t about), chances are if someone’s rocking 18″ pythons, I’m not going to attempt to take their lunch money.

Having big arms is the “holy grail” for just about any guy who has ever lifted a weight in the history of the world, and this 4-week program delivers the goods.

The manual includes 4-weeks of programming, training templates, and links to videos of every exercise.  The only thing it doesn’t include is a tape measure and a copy of Hulk Hogan’s theme song, “Real American.”

Being human means being enamored by a litany of things in the health/wellness/physical preparation realm. Some people are easily swooned by fancy watches and elaborate looking exercises Others by cryochambers and Paleo recipes that taste like sawdust. I am not here to play judgement police. For the most part, everything has a time and place… END_OF_DOCUMENT_TOKEN_TO_BE_REPLACED

Back tweaks are an inevitability. They happen to people who lifts weights regularly, and those who just look at weights. They happen when doing something as inane as bending over to tie your shoes, as well as when you’re doing some less inane, like, fighting crime at night. They happen on a Wednesday. There’s no… END_OF_DOCUMENT_TOKEN_TO_BE_REPLACED